When in Rome, Roma Antica Tour:  Planning on going to Rome for your next trip? Explore the details of ancient Roman politics, society, and empire, on a tour through the Colosseum, Palatine Hill, and the Roman Forum with Context Travel.  We highly recommend it.

Song of the day: "Rotolando Verso Sud" by Negrita. 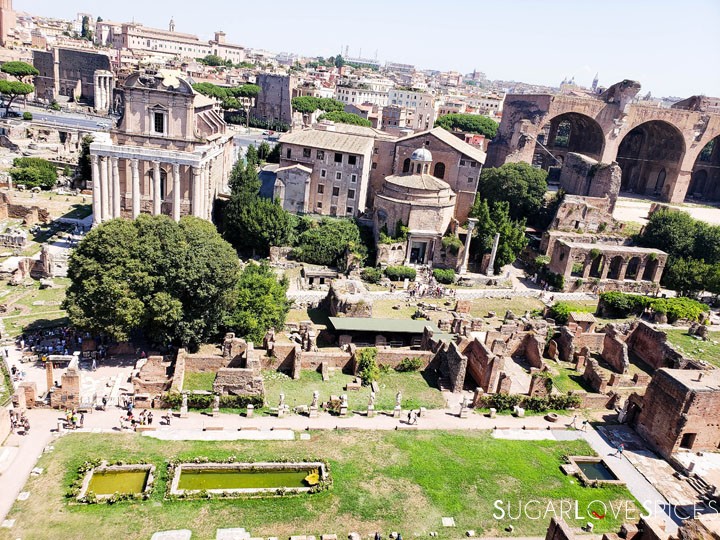 [Disclaimer: We have been offered a "Roma Antica" tour by Context Travel however all opinions are our own]

When in Rome, Roma Antica Tour will take you to scenic spots to visually see the vastness and beauty of ancient Rome. The picture above is such a spot on top of the Palatine Hill overlooking the Roman Forum. Truly breathtaking and majestic.

Our guide was Dimosthenis. His knowledge of archaeology, ancient art history, and Roman architecture was the key that he used to share his unique perspective on the Eternal City.

We were a small group of 5 people and we started the tour from the Colosseum. Nicoletta is from Rome and I know for sure she misses it when we are back in Canada. For me, I find it quite mystical and every time I see the Colosseo, it's like the very first time. During the day it stands huge in the skyline and at night beautiful all lit up!

The Colosseo was built during the Roman Empire and was also known as the Flavian  Amphitheatre. It stands about 57 meters high and took 80 years to build. When you walk into this piece of history it is magnificent, however, it is also like stepping back in time. Imagine thousands of people watching as gladiators fought, truly amazing! As a result of taking this tour when in Rome, you will learn all about the battles, the building and feel in its wall, a period of time long ago! 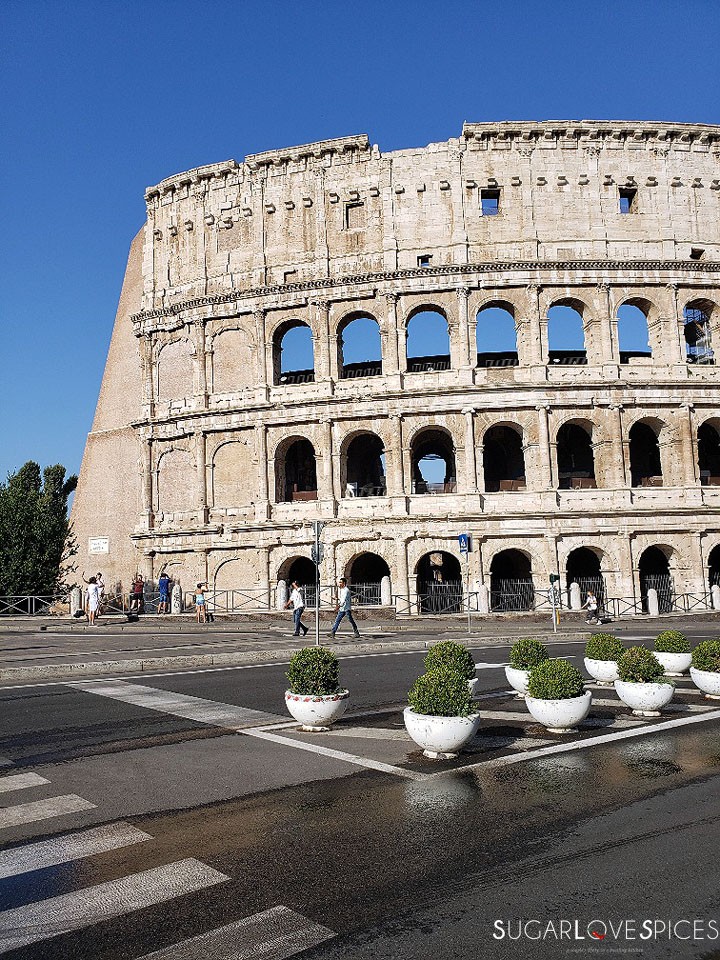 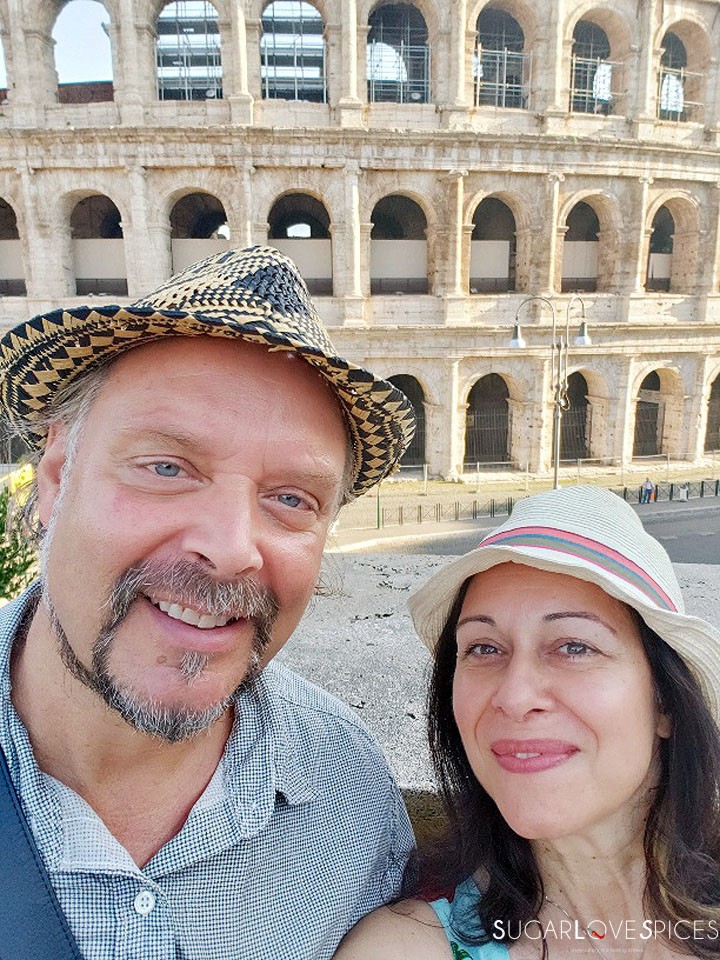 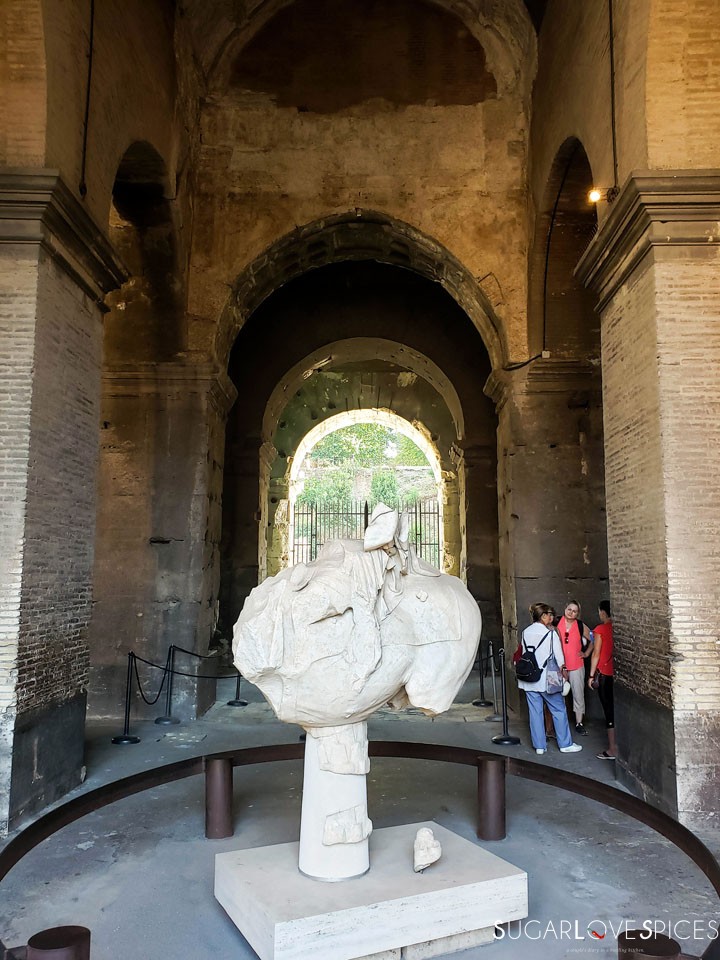 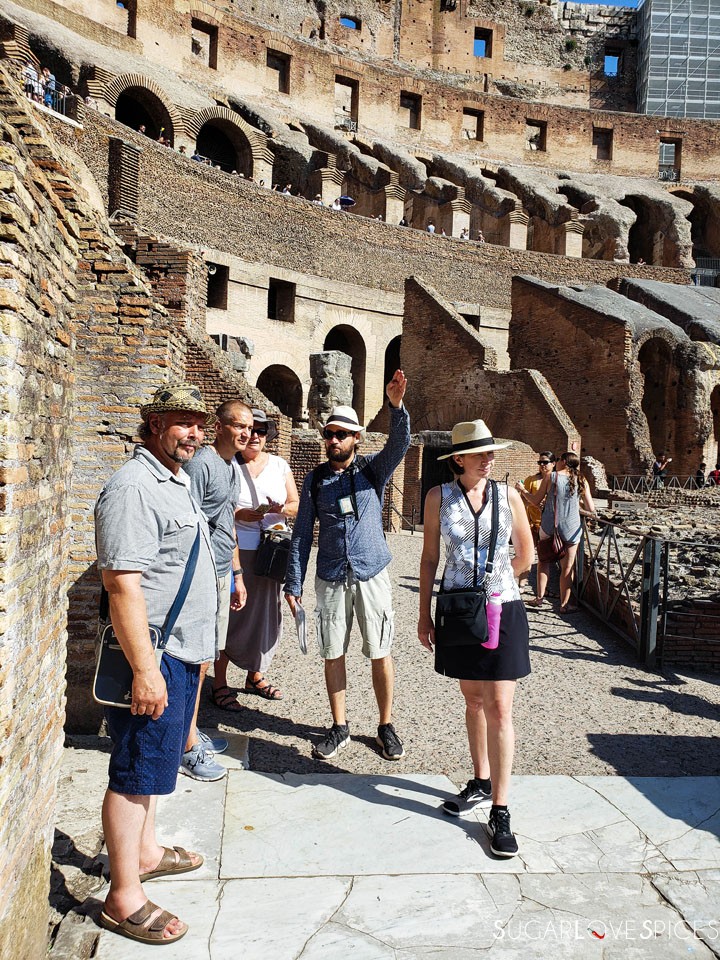 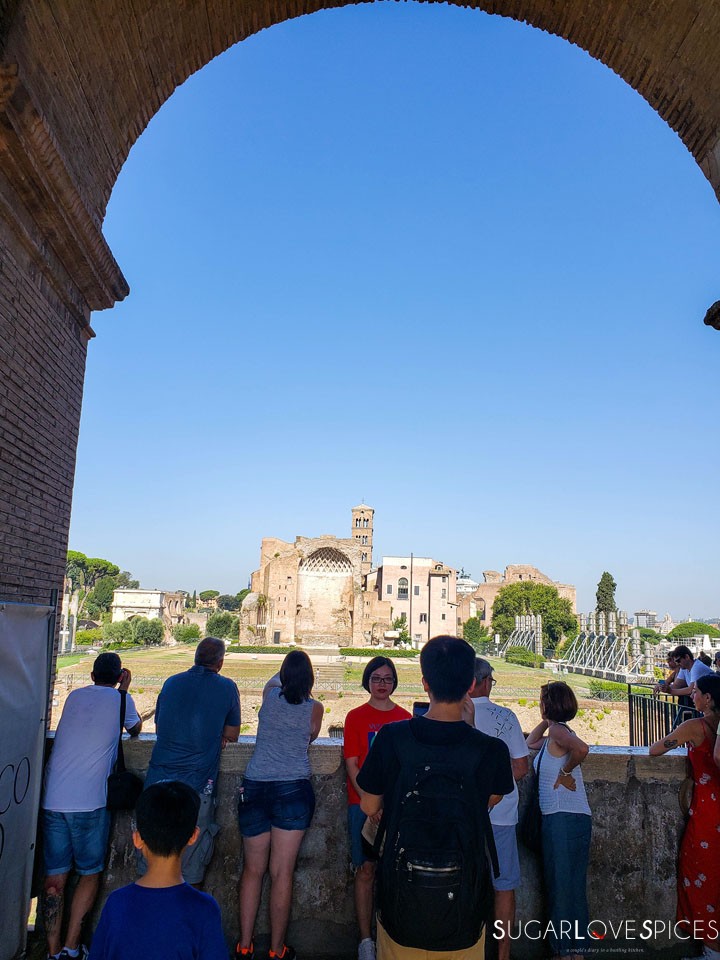 I often am amazed at how when modern mechanical technology was not found, how in the world they built a monstrous structure so high and so strong. The material was not light that is for sure. I guess with thousands of slaves wonders can happen, however always at a price!

This arch commemorates Constantine's victory over the Roman tyrant Maxentius in the fall of 312. It is the last standing monument of Imperial Rome. Isn't that incredible! I may seem too enthusiastic, however, I come from a place where our history is only 100 years old. We are talking thousands upon thousands of years in the ancient city!

This was the second part of our tour while walking from the Colosseum to Palatine Hill. It's a walking tour so comfortable shoes are a must and don't worry bout all the walking. For us, Dimosthenis kept us captivated with his skill in storytelling, history, and with enough passion to ignite anyone's curiosity and attention! 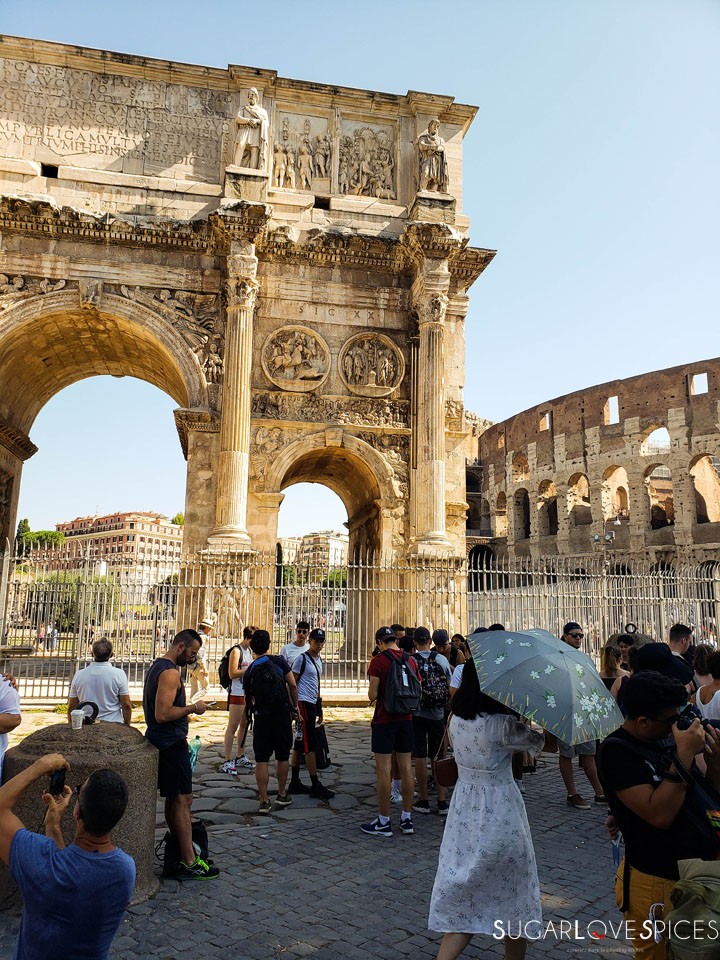 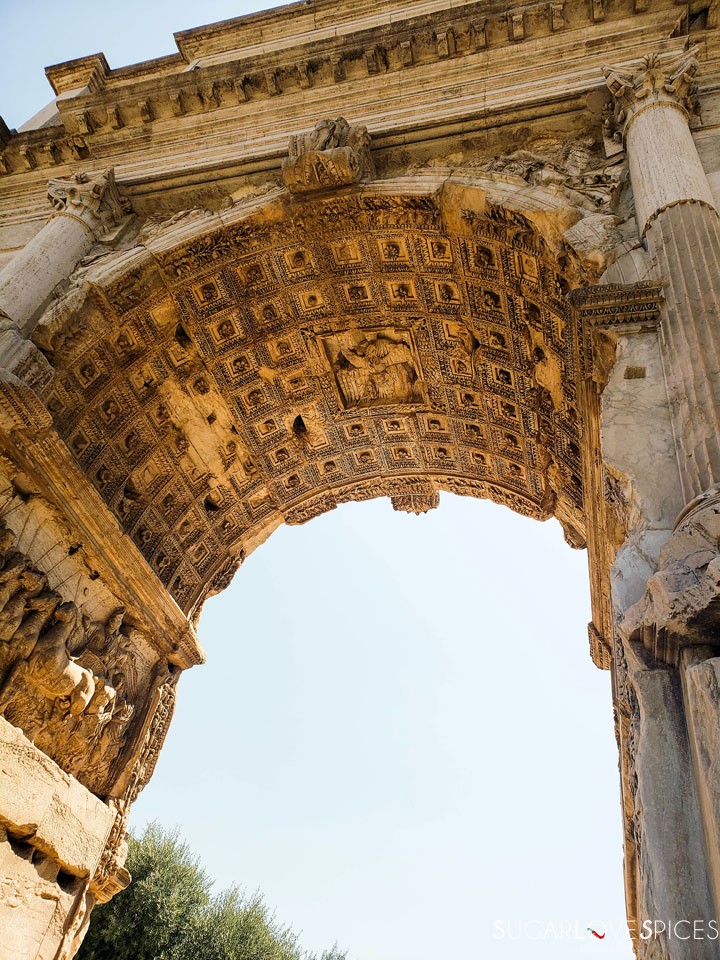 The Palatine Hill was our next stop. It is the centremost of the Seven Hills of Rome. It is said to be one of the oldest parts of the city. The nucleus of the Roman Empire!  Emperor Agustus built his Imperial palaces here. The gardens provide some great shade and coolness from the heat of the summer sun, however, the views from up here are breathtaking and scenic! 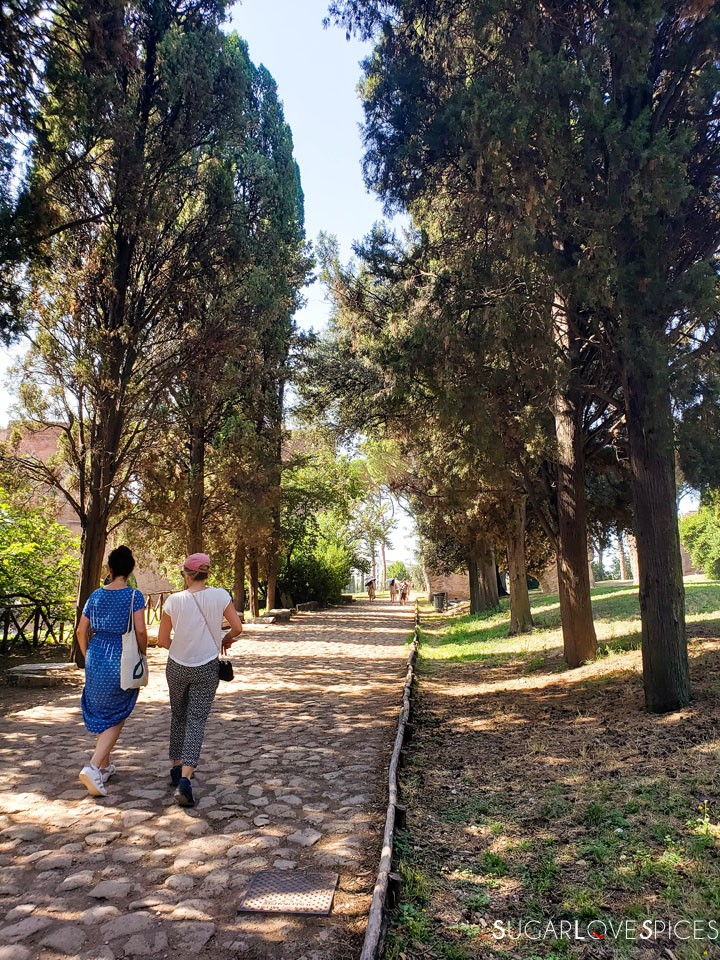 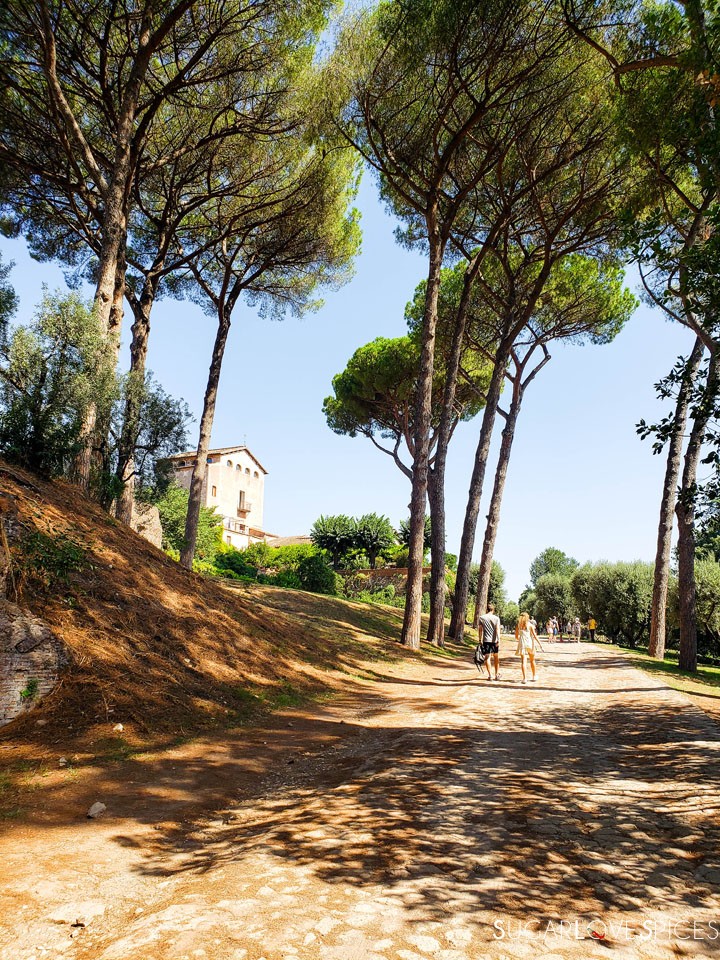 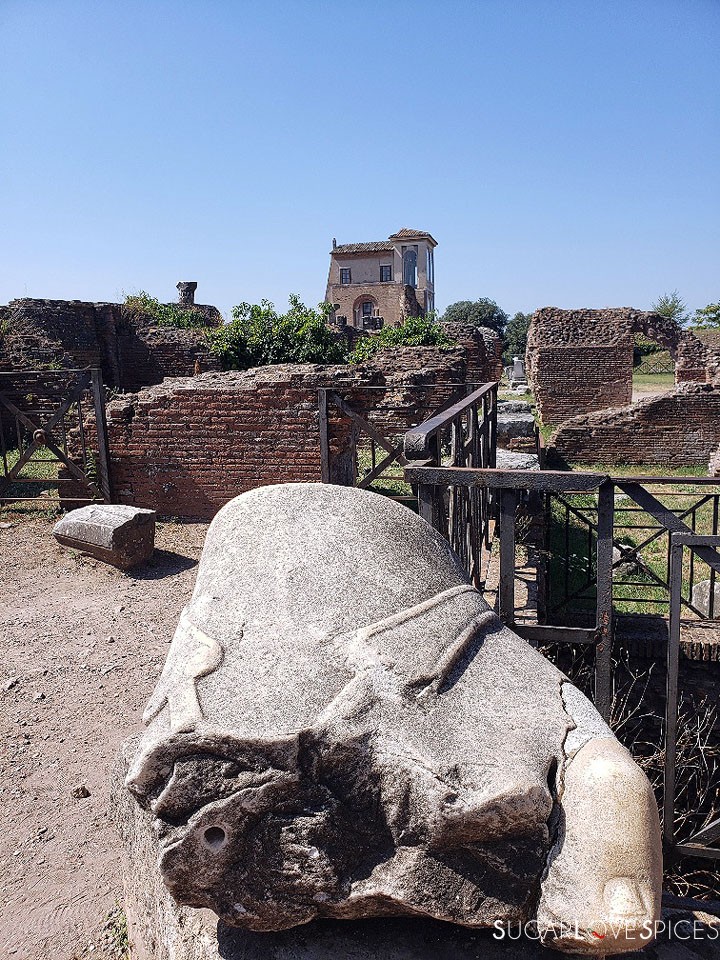 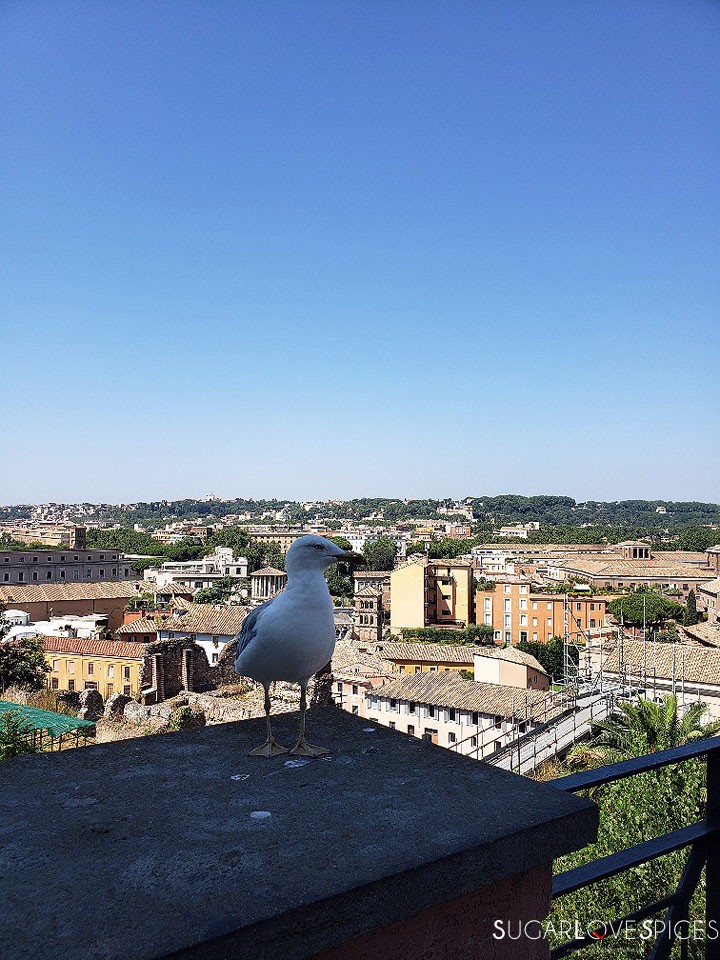 This picture of a large foot is part of the remains of a statue of Constantine. Pretty impressive right? We are ready for the last leg of the tour and down to the Forum we go. This is what you can expect on this tour, some pretty amazing things!

This is a rectangular plaza, which consequently is surrounded by many ancient Government buildings. For centuries the Forum was the scene of day to day activities and also triumphant processions, criminal trials, and gladiator marches. It was also not uncommon to hear poets and actors performing. Many of the most important structures were located on or near the forum. Now it is an excavation site when many artifacts have been found and on exhibit. Our guide painted lovely pictures of the hustle and bustle of the forum. Quite enjoyable I may add! 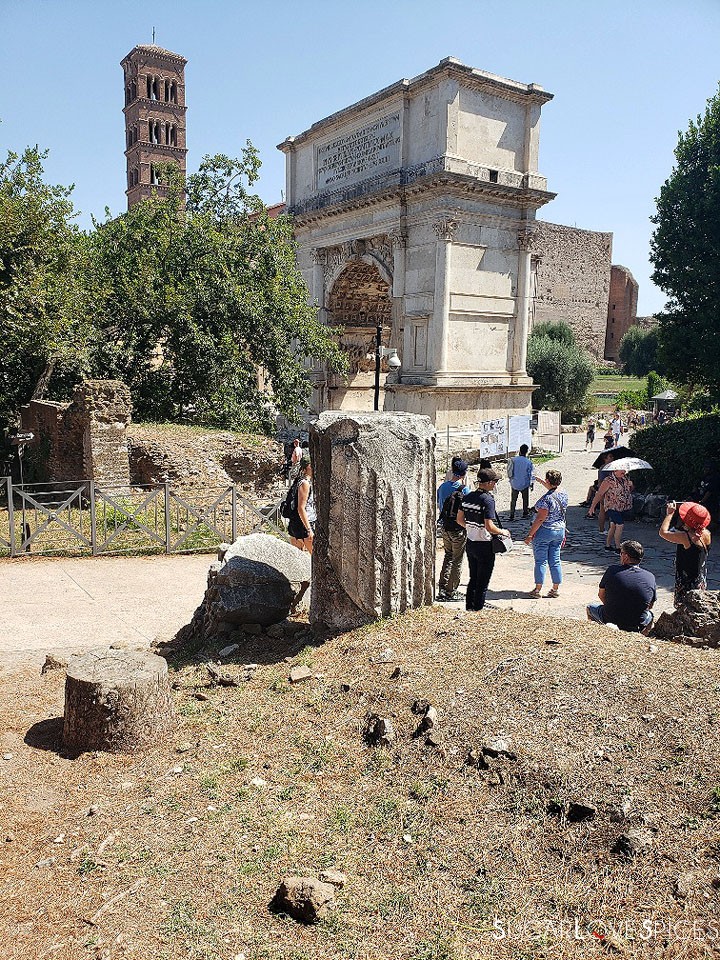 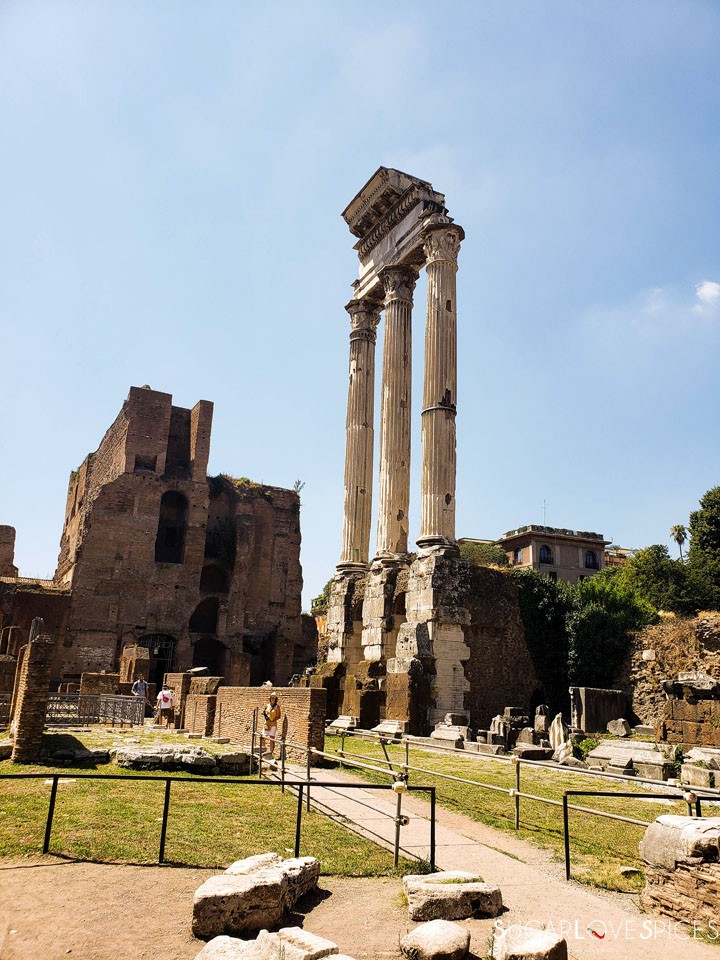 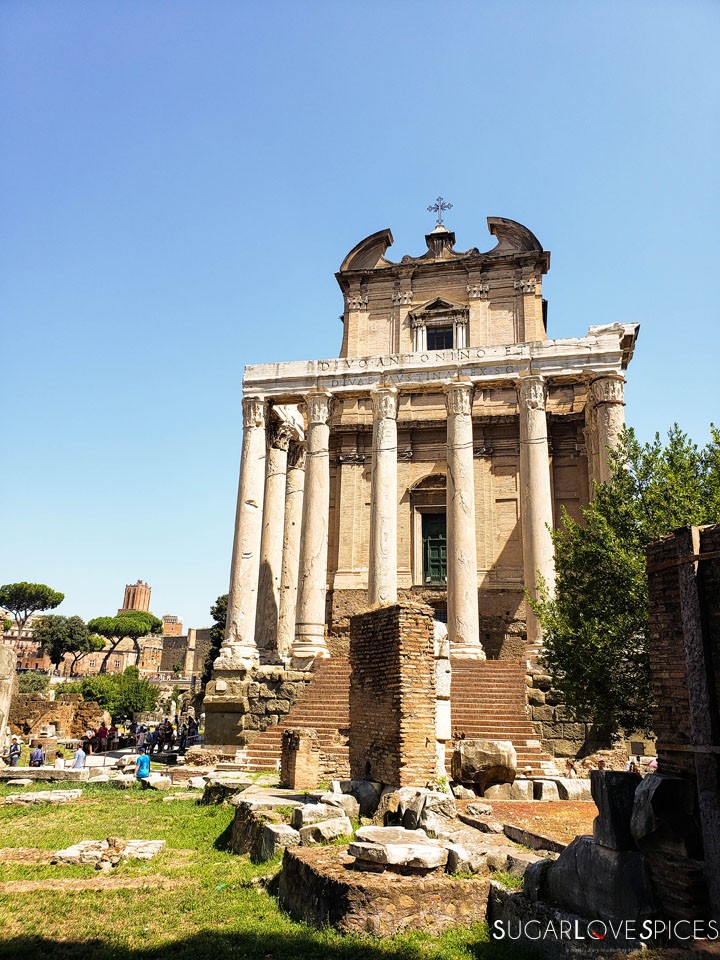 Rome has a way of capturing your heart and have you wanting to come back time and again. Its ancient mystery and beauty captivate our senses and curiosity to a time of ancient civilization. A time of power and conquering, architecture and art. We highly recommend getting into contact with Context Travel and book this tour, you will not be disappointed! After all, When in Rome .........................

..... for a pizza and an appetizer made of 'prosciutto and melone'. We were both so hungry after all that heat and walking! We went to one of our favorite pizzerias tucked away in an alley, not too far from the Roman Forum, called Alle Carrette, and shared 'prosciutto and melone' and a beautiful Pizza Margherita with Arugula. That's life, lol! 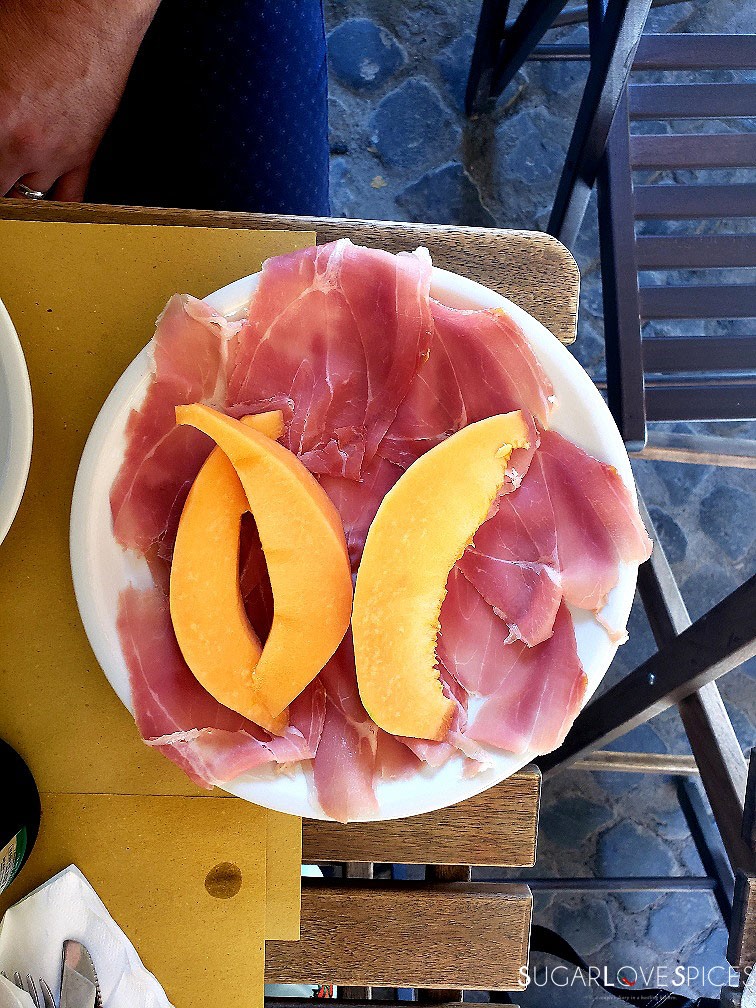 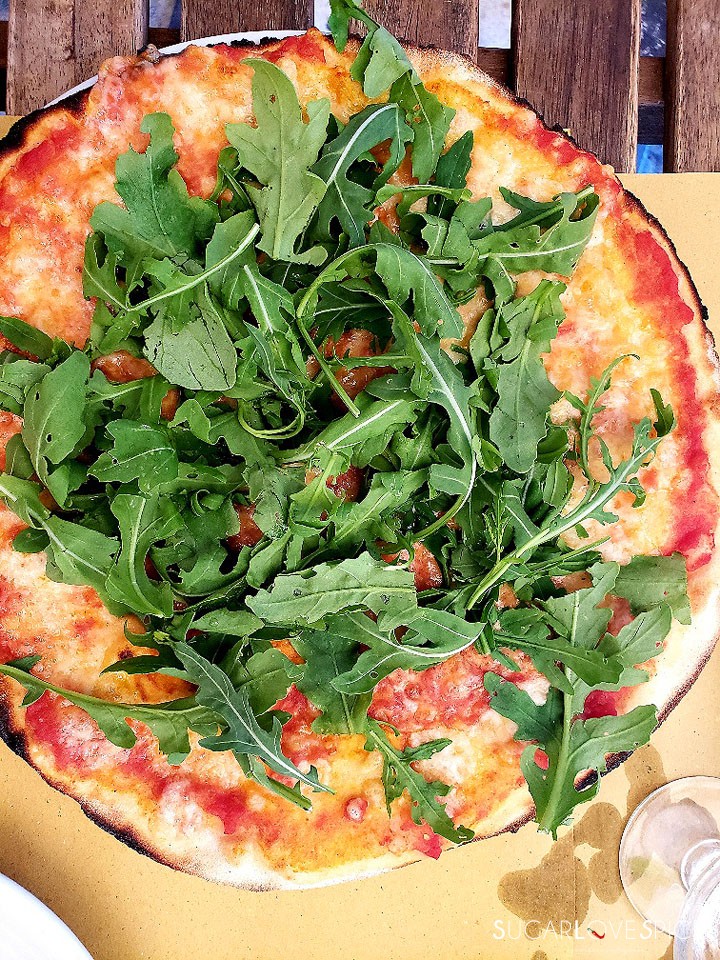 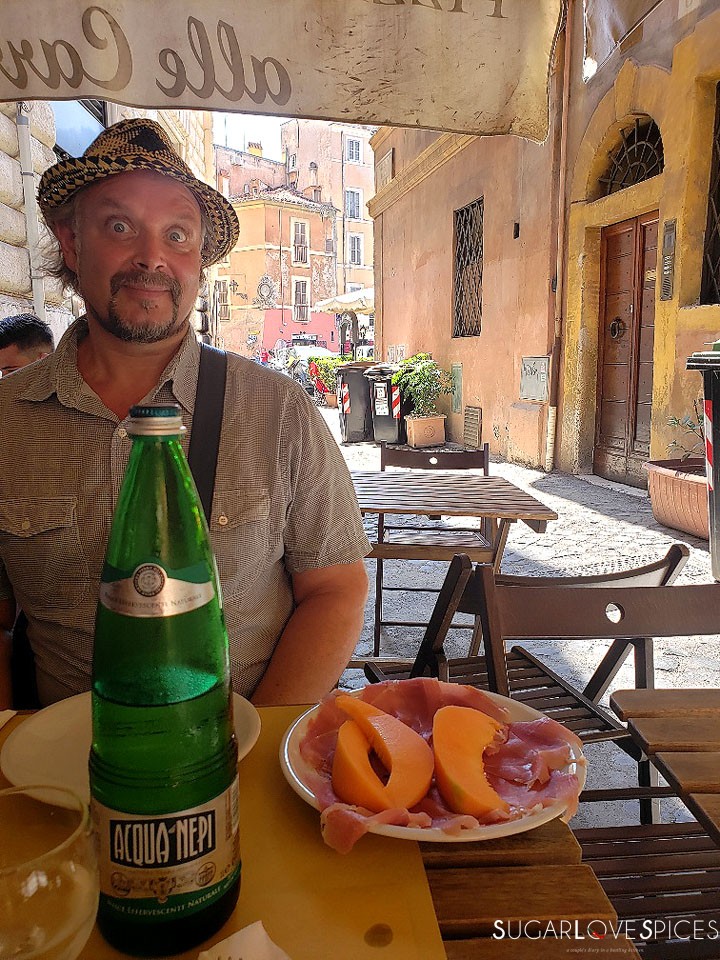 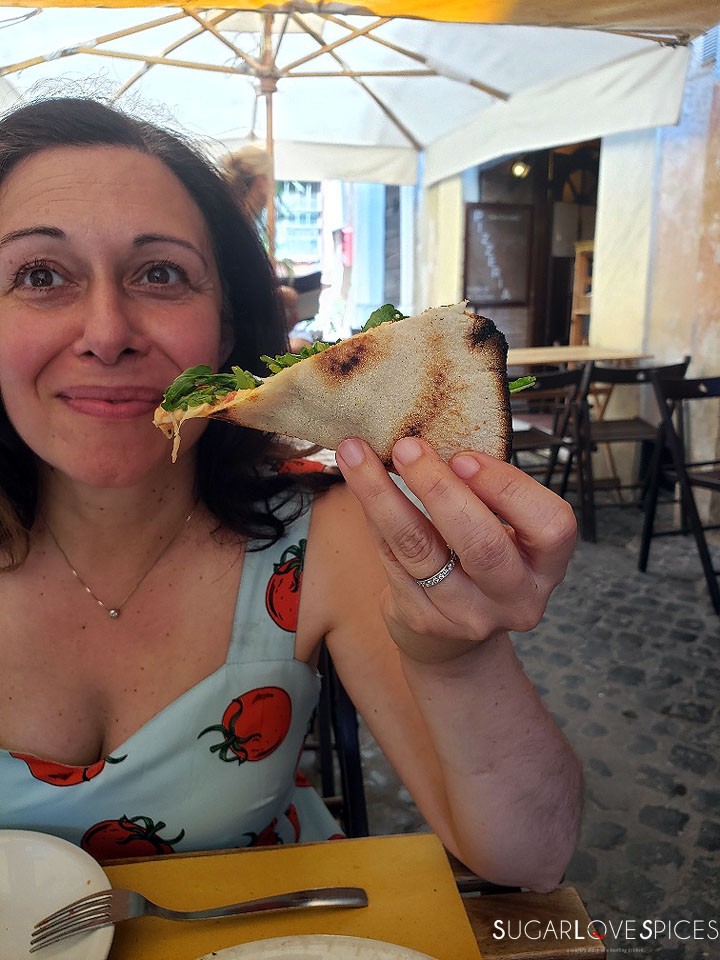 Song of the day: "Rotolando Verso Sud" by Negrita.