The recipe for this vegan apricot pear crumble is easy, light, sugarless, vegan, and delicious. The sweetness is given by the maple syrup, pear slices and apricot jam. 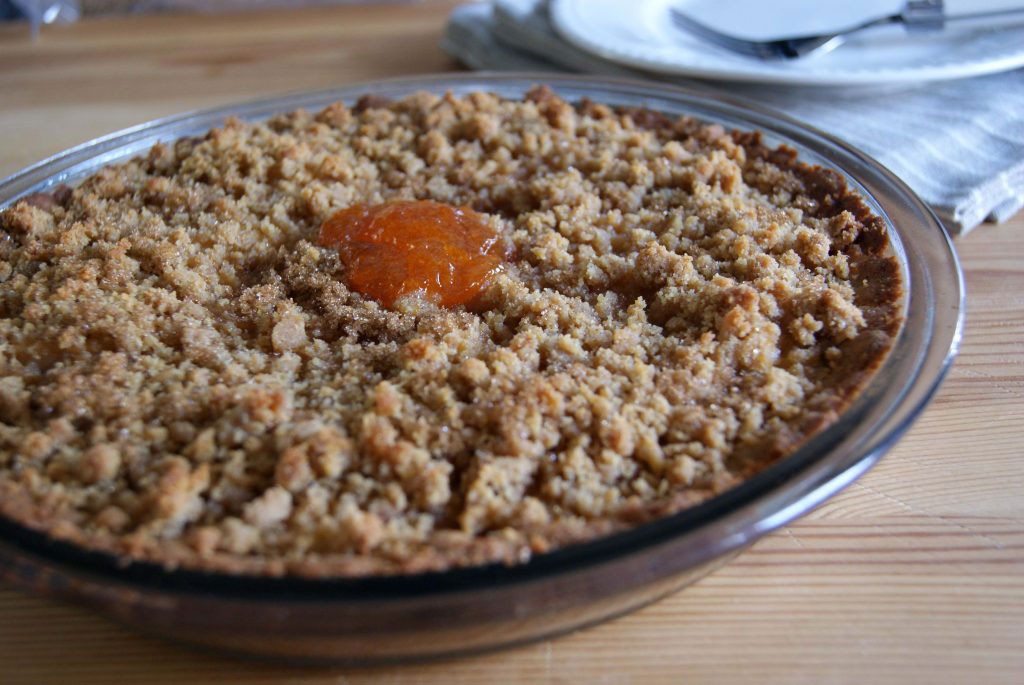 A series of unfortunate events can ruin your day. Or they can turn up the volume of your creativity and actually make it a success.

This is the start of my story. I wanted to bake the vegan gluten-free Crostata with apricot jam and spelt flour that I had learnt at the Vegan Baking Workshop that I attended in Rome few weeks ago. But when I looked into my pantry I realized that I had kamut flour and not spelt. I like ancient grains. I'm trying to incorporate them more often in my baking, and this time I forgot that I had wanted to give the kamut flour a try since I had used spelt many times.

The recipe is easy, light, sugarless, vegan, and delicious. The sweetness is given by the maple syrup of which I have no shortage since I am in the colossal kingdom of maple trees. The shortening, a compilation of water and canola oil, the tartness provided by the lemon zest. 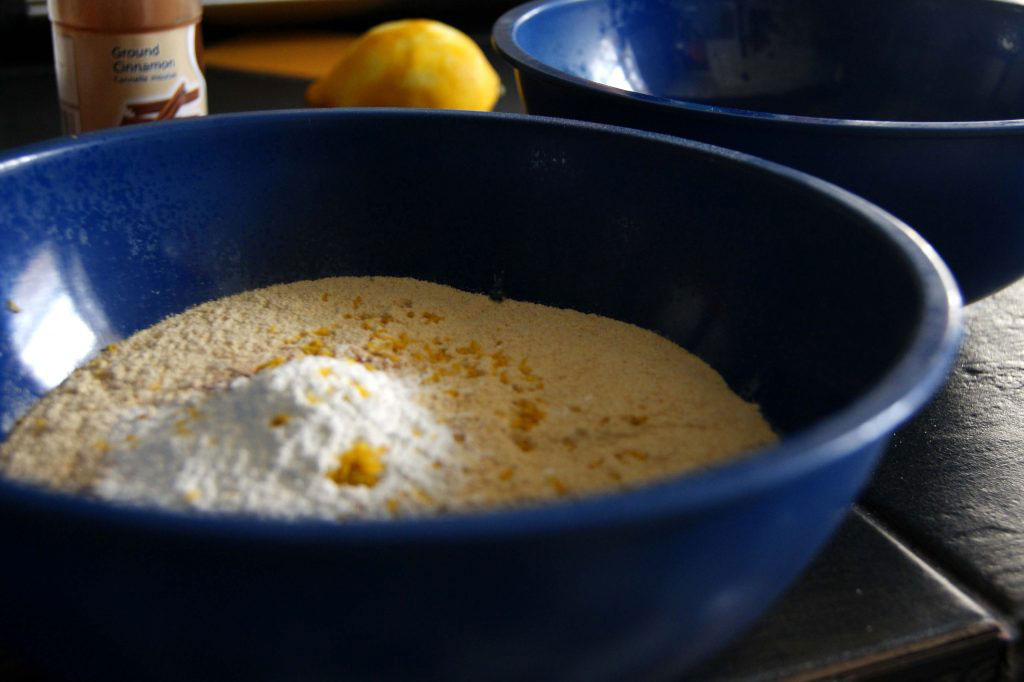 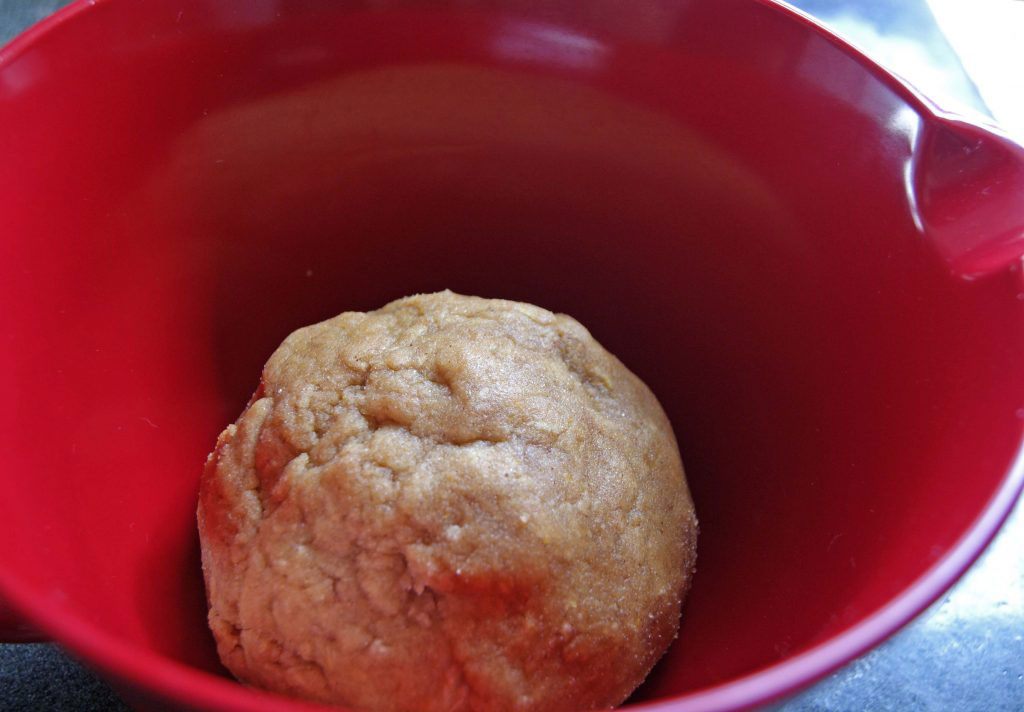 But back to my story. During the waiting time for the dough to rest in the fridge, I realized that the pan I had for the crostata was the wrong size. My husband being the problem solver quickly suggested to go by a new one, not realizing that we're in Canada and it's not easy to find crostata pans where almost nobody, other than me, knows about this italian dessert. Anyway, we checked out 3 stores, traveled a few kms, and all that we could find was a 9 inch glass pie plate...but the one for the crostata has corrugated edges. Dam!

So we think, we'll fake it till we make it and the crostata is going to happen without the corrugated edges. In the meantime, the dough sat in the fridge for more than the required time. I took it out, started to roll it out as I usually do with this type of dough, CATASTROPHE!....crumbled into a pile of sawdust. Maybe the kamut flour wasn't the right choice? Or maybe it wasn't the right day for crostata? I am in the kitchen, kicking the sand (metaphorically) and in flies my husband with the brilliant idea to turn it into a crumble. Obvious, not? 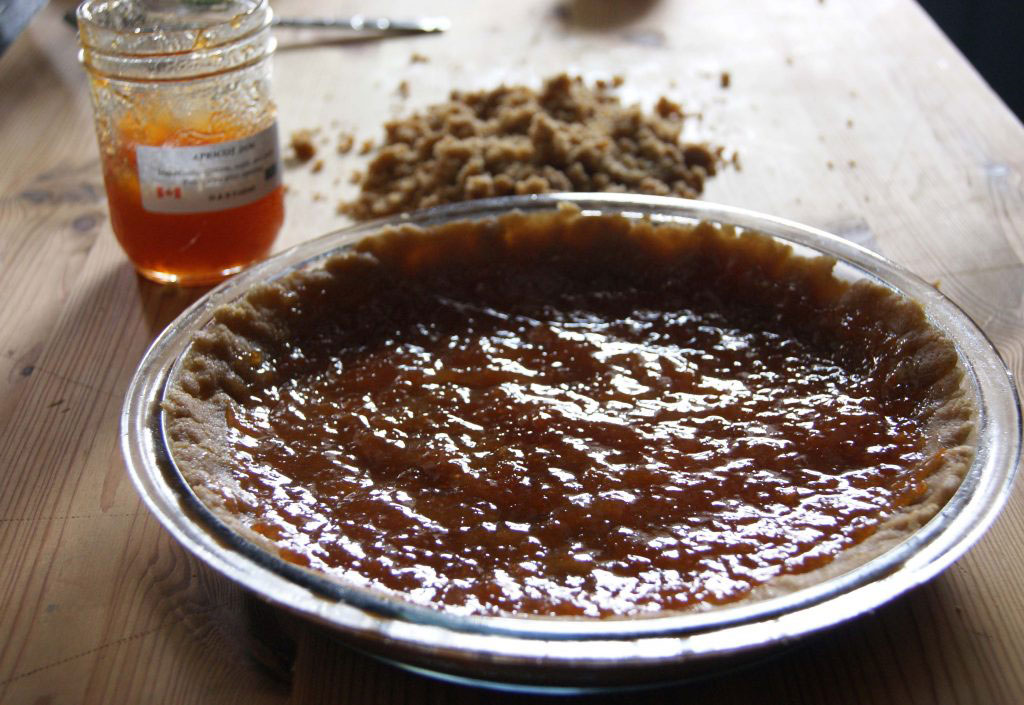 He looks around and sees a pear sitting alone in the fruit dish and thinks caramelized pear is a perfect match for the apricot jam. He goes to work carving pear wedges. 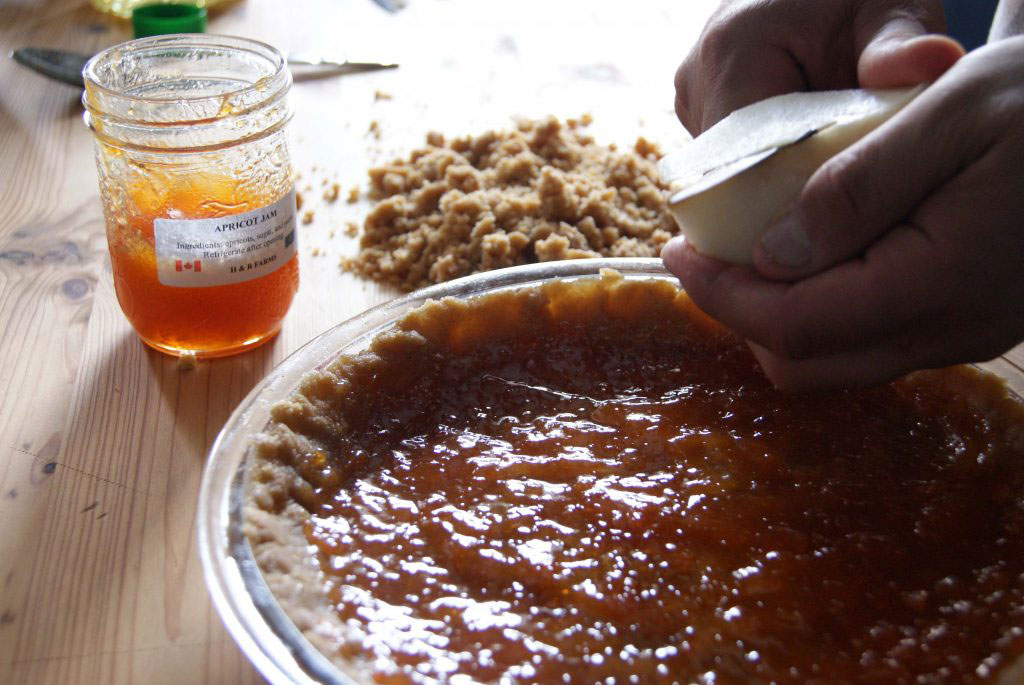 Topped the whole thing with the rest of the crumbled kamut and the pièce de resistance a dollop of apricot jam right smack dab in the middle. 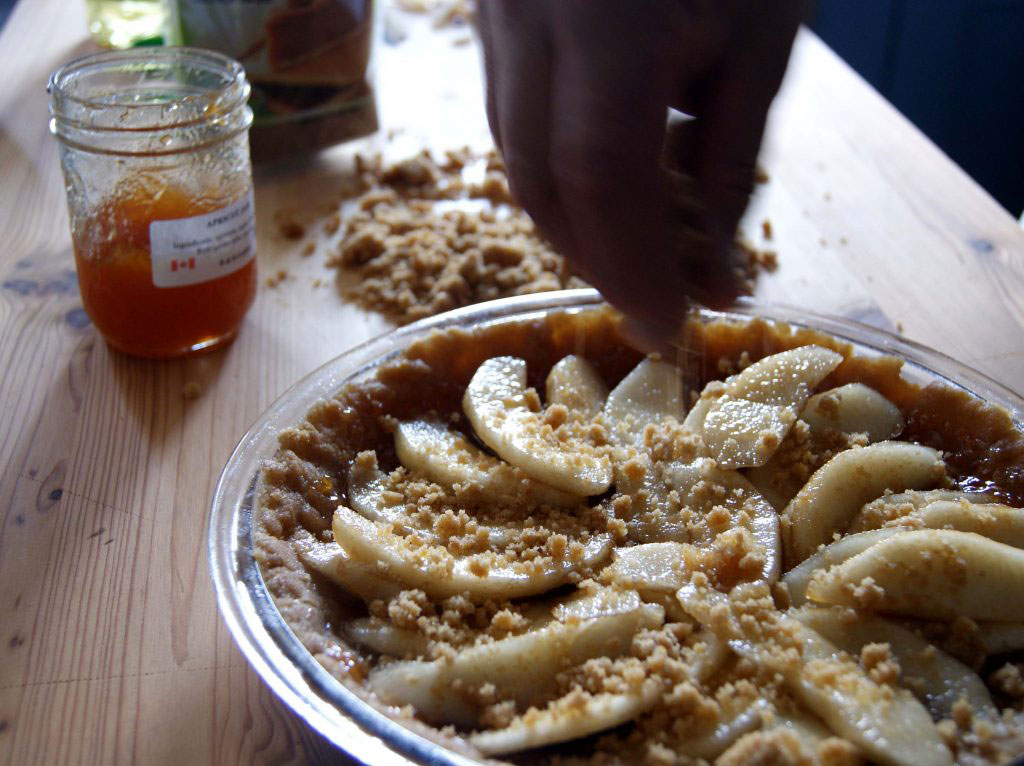 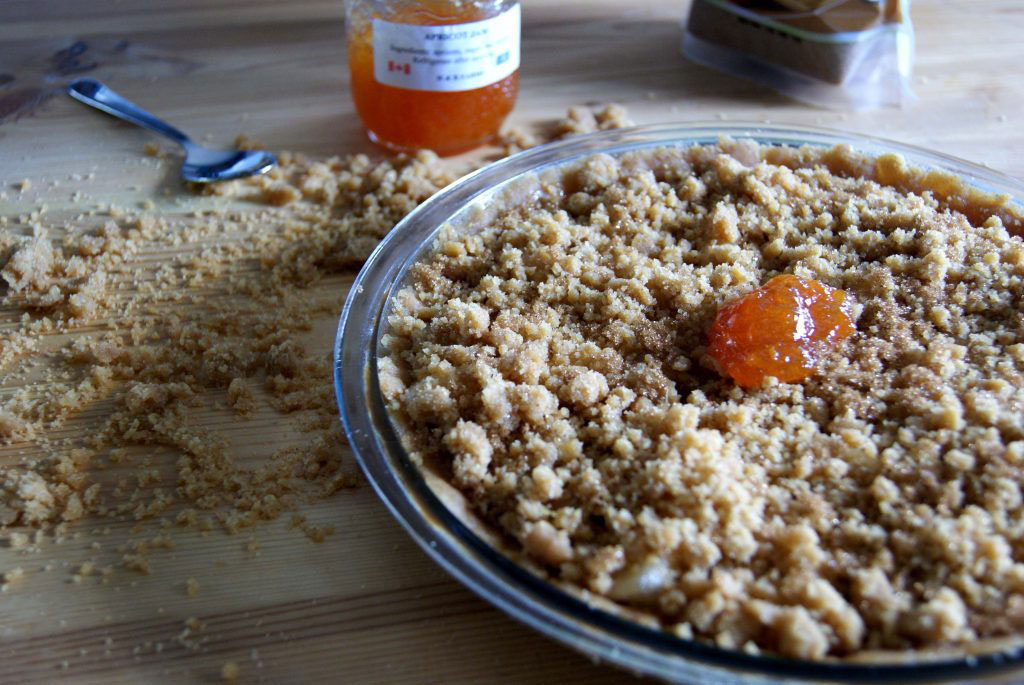 We take the crumble out of the oven, let it cool a bit, hesitantly put the knife into it, we both look at each other thinking...I hope this is good. The wedge is cut, a nice crispiness to the crust, pears smell wonderful and on goes a nice spoonful  of frozen vanilla yogurt. 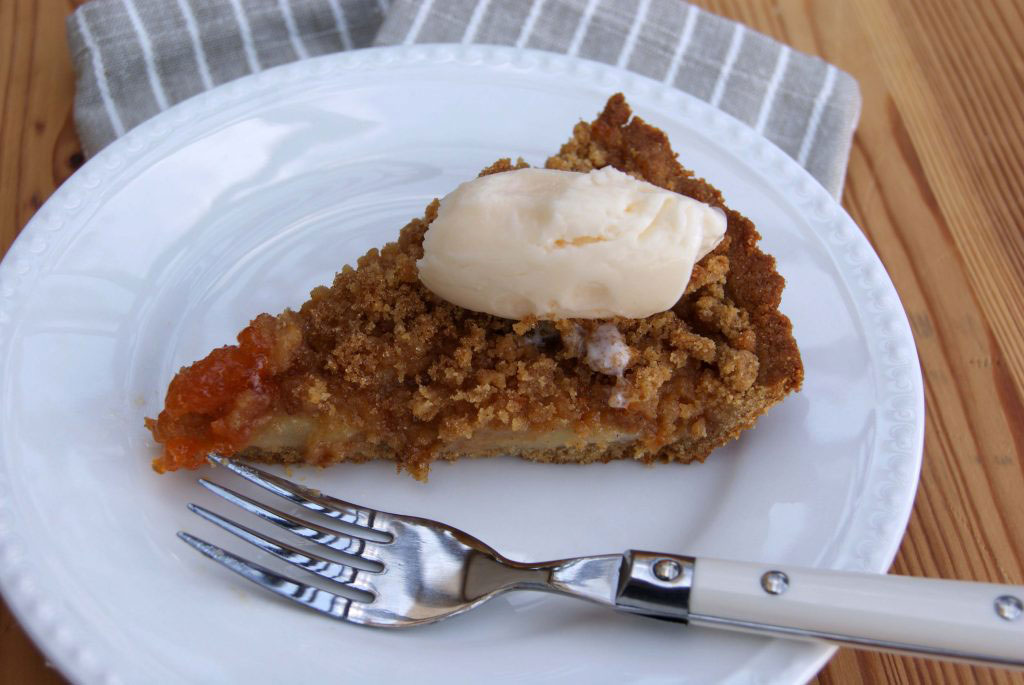 First bite....the courageous one, me, as Loreto looks on. Then he takes a bit. We are redeemed. It tastes Amazing! The flavour of the kamut has a nutty sweet flavor. Beautiful caramelized natural sugars coming from the pears meld with the sweetnes of the apricot jam, another great one from H&R Farms. Topped with a lovely golden brown crumble brought home by the creaminess of the partially melted frozen yogurt.

If you want to try a classic italian dessert: Jam Crostata (not vegan or gluten-free), the recipe is here.