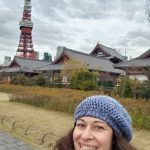 Nicoletta Goes To Japan, or, how your dreams can come true. I got to travel to Japan, invited by a local Tv, all expenses covered for 8 days, to shoot an episode of a show called ‘Who Wants to Come to Japan‘! All of this, because of my passion for Japanese culture and, in specific, Dorayaki.

Song of the day: Lost in Japan – Shawn Mendes 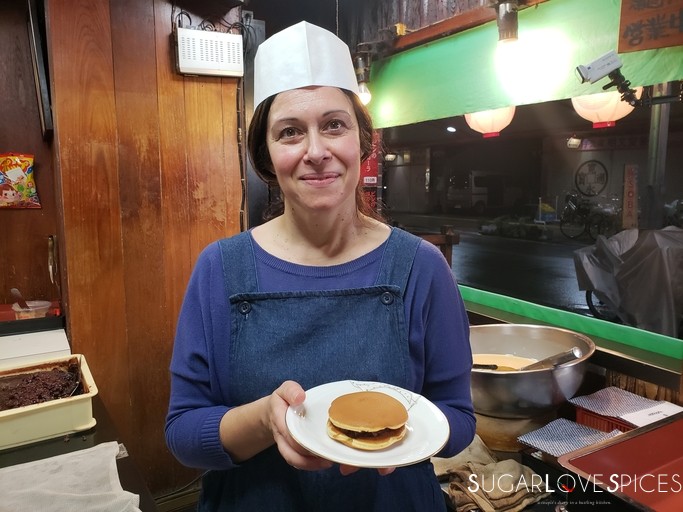 [Disclosure: I traveled to Japan in December 2018 in order to appear on the TV show ‘Who Wants to Come to Japan‘!  I was invited by the producers and my travel and costs were covered. I was not asked to share any posts about it with my readers.  I’m doing so because it was an amazing adventure, and I want to tell you all about it!]

That life can be unpredictable and reserve surprises, I was already a firm believer. Now, I have proof.

I'm on the Japanese TV show ‘Who Wants to Come to Japan‘!

The end of 2018 presented me with the opportunity of a lifetime. Traveling to Japan, invited by a local Tv, all expenses covered for 8 days, to shoot an episode of a show called ‘Who Wants to Come to Japan‘! I couldn’t say anything until the show was on air in Japan in order to keep TV secrets. You can’t believe how hard it was to withhold from sharing my excitement with the world!

The episode aired in Japan on March 4th, 2019, so I can finally tell you all about the once-in-a-lifetime experience I had!

Overall, the program offers trips to Japan for foreigners with a passion for a specific aspect of Japanese culture. The subjects vary broadly, and the participants come from all over the world, with the requirement that they haven’t traveled to Japan before.

The show takes the entertaining approach of making everything a surprise. They come to your home to film you, then they leave you hanging for a bit until they knock at your door filming your astonishment when they reveal you were selected to go to Japan. Then, when you land in Japan, tired and jet-lagged, they meet you at the airport, start filming you from there, and you go where they take you on a wonderful adventure. 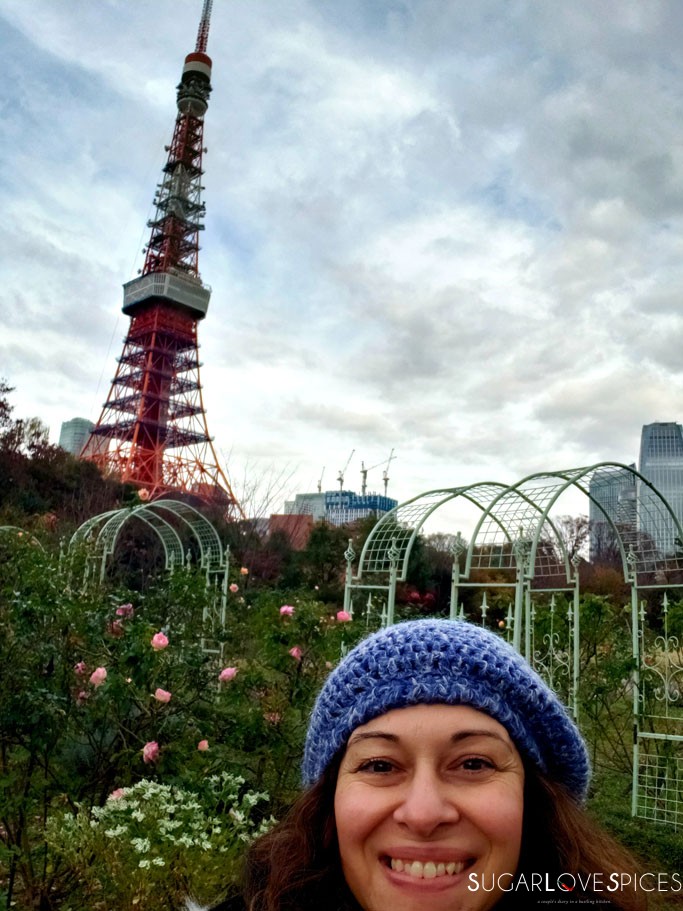 Things started in November 2017 with an unusual email that I received.  They were contacting me because they were recruiting people with an interest in Japanese culture for a Japanese Tv show that launched the year before. They were interested in learning more about me and my love for Dorayaki, and Japanese culture in general. After a few back and forth exchange, when things were getting more serious and emails longer and more detailed,  I dropped the email exchange and let it go. 2017 was a very heavy year for us and by the end of it, Loreto and I were drained, exhausted, and I was not ready for adventure. Little did I know that destiny was not to give up and would persist!

I forgot all about it until one year later, in October 2018, I got a similar email but from a different person, the lovely Kyoko, contacting me because they were interested in featuring me again as one of the candidates they would like to invite to Japan. When the Universe knocks twice at your door, you start to pay attention and so I did. A pretty long email exchange started and this time ended with their request of a profile video followed by the incredible news that somebody was coming to Edmonton to film me in our house making Dorayaki and also going to our local Asian store where I usually get the ingredients to make them. Pretty exciting already, isn’t it? Well, that November day started cold and snowy and the director, a cameraman and a translator, Aimi, Seiji, and Yoichi, arrived from Japan and the US and knocked at our door. I was a bit nervous, but having Loreto by my side always relaxes me and in the end, I was able to show my passion and love for Japan and its culture, and also my skills at making Dorayaki. I got to go with Loreto and the crew to our local Asian store T&T to buy some ingredients, go back home to make the anko (azuki bean paste) filling, and the "pancakes" from scratch. Then, we invited over some family and friends to share the experience and the snacks. They had a great time sipping Loreto's tea, eating the Dorayaki, and being interviewed by the crew. 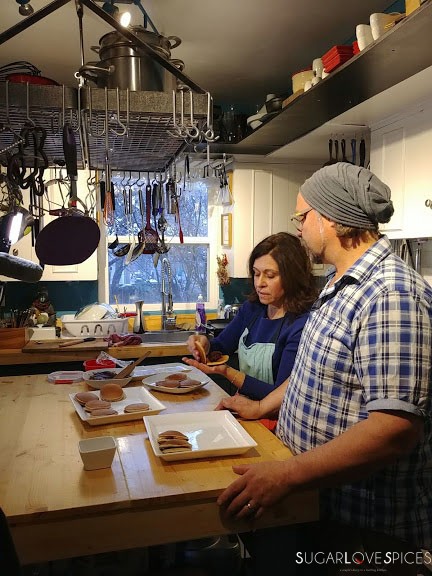 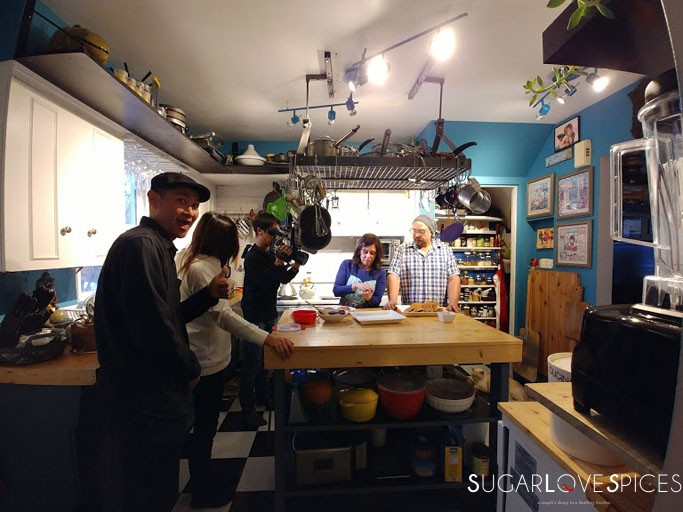 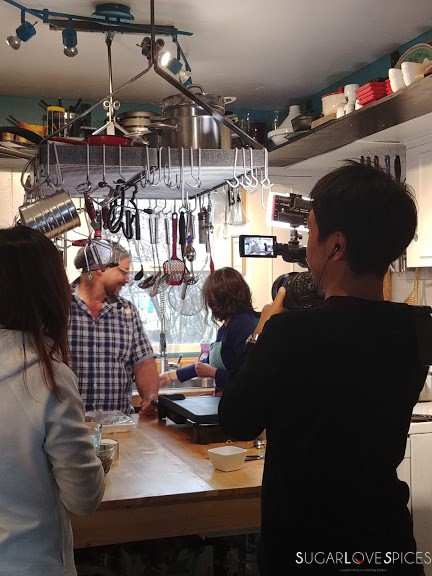 Dorayaki, a door to Japan

Thank you, blog, and thank you, Dorayaki. I believe the producers found me through our blog and the post on Dorayaki, the popular Japanese “wagashi” (confectionery) I like so much. Well, actually I have 2 Dorayaki posts, one with the regular anko filling, one with a chocolate hazelnut spread filling. Dorayaki is probably the most well-known and popular Japanese sweets and traditionally it is made of two small round "pancake-like" cakes, sandwiched together by a sweet azuki (red bean) paste called anko. However, Dorayaki is not a pancake, the texture being more like a sponge cake.

After this experience, I am ready to review the recipe with the tips I learned from the best. 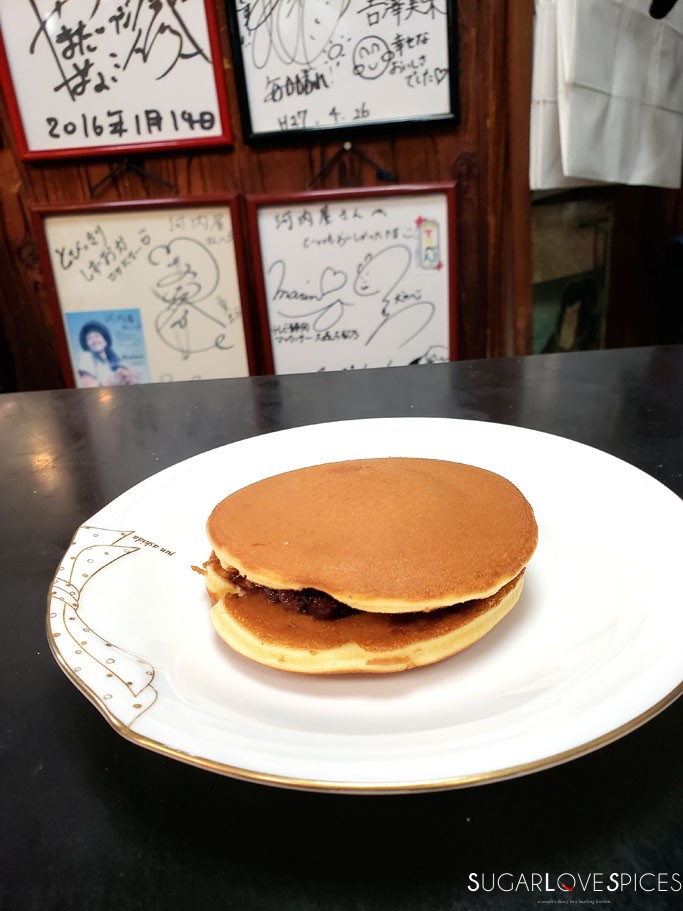 Legend has it that the first Dorayaki were made when a samurai named Benkei forgot his gong (dora) upon leaving a farmer's home where he was hiding and the farmer used the gong to fry the pancakes (the yaki part of the name means “cooked on dry heat.”), thus the name Dorayaki.

They are the favorite food of the Japanese anime character Doraemon, a blue cat-robot who loves dorayaki. He regularly gets into all sorts of trouble because of his obsession with the round cake, and in every episode, he tries to eat a pile of them, usually disturbed by some occurrence. 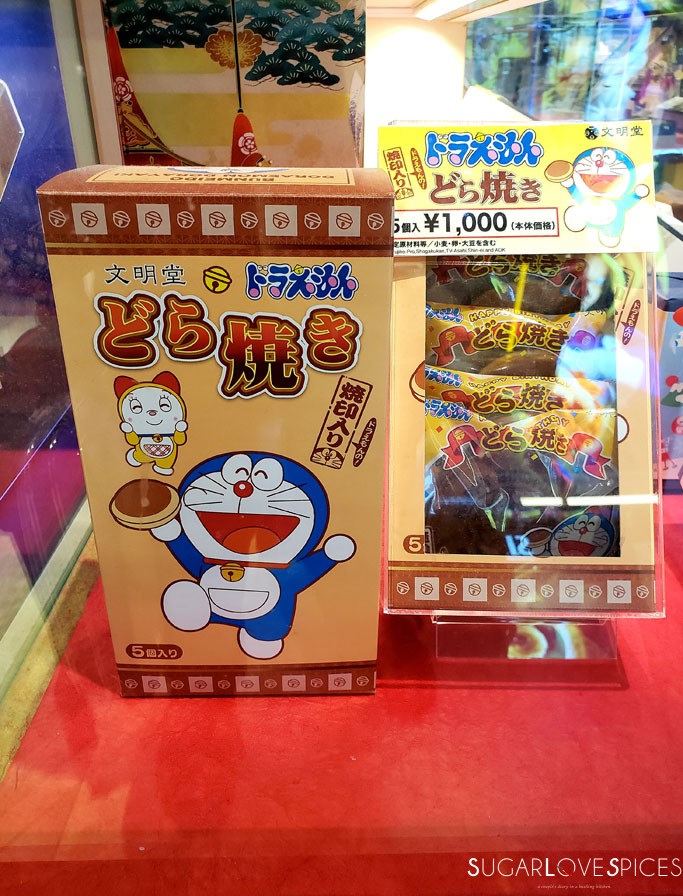 The filming went well, we were all pretty happy about it, now it was time to wait. It seemed that they were discussing whom they should invite to Japan in early December for the next episode, among candidates from Europe, US/Canada, and Russia.

They did ask me if I could make a week to 10 days available in early December if I was selected, and, of course, I said I could. Then, another email arrived, saying that the producer was planning to do a 30-minute video call interview with the candidates. They stressed the fact that they wanted to do a Skype call and we had to use our computer at home because it would give us a stable screen and a stable connection! Oh, they also requested both me and Loreto to be home for the interview.

We did not think that was a trick at the time. When the morning of the video call arrived, we were all ready to go with the computer set up when, instead, the doorbell rang. Yoichi was standing there holding up a sign inviting me to come to Japan and two cameramen were filming our astonishment and excitement.

They had lied to us about the Skype video call interview to do the surprise…. And what a surprise it was! At this point, both Loreto and I were in tears of joy! 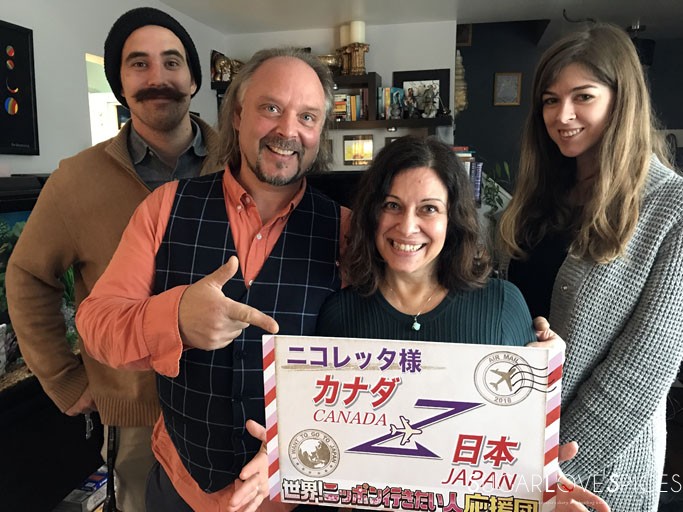 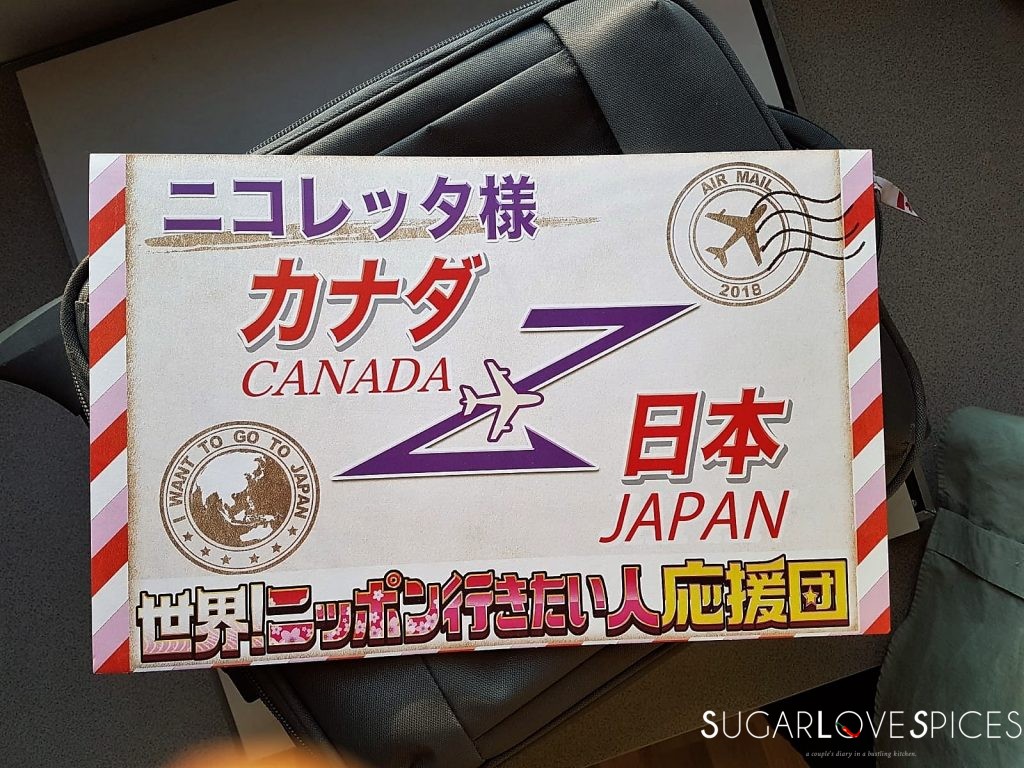 I had less than a week to prepare myself, pack, and mentally digest the whole thing. Especially that I was going alone, not with Loreto, my rock, my support. But I was going where I had always wanted to go. To Japan, and with a customized experience for me. The opportunity of a lifetime!

I set off for Tokyo on Sunday, December 2nd, 2018 and my amazing experience began. One that will stay with me forever! 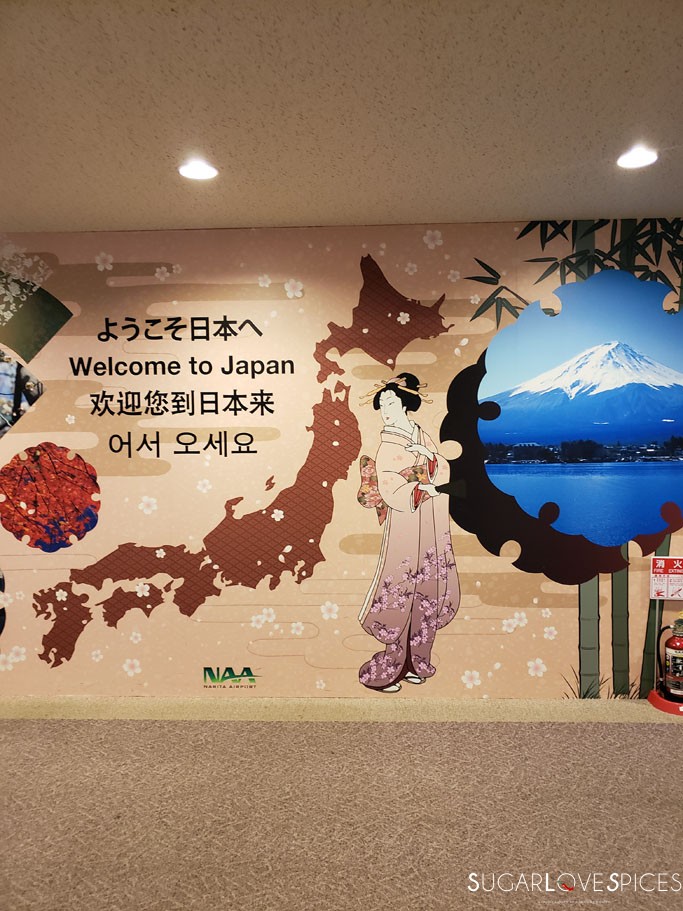 Hang on, it's not over yet. There will be part 2 and most likely part 3 and part 4 of the saga "Nicoletta Goes To Japan"!