Korean BBQ Chicken Tacos for your next Taco Tuesday: succulent, so tasty, juicy, and delicious. 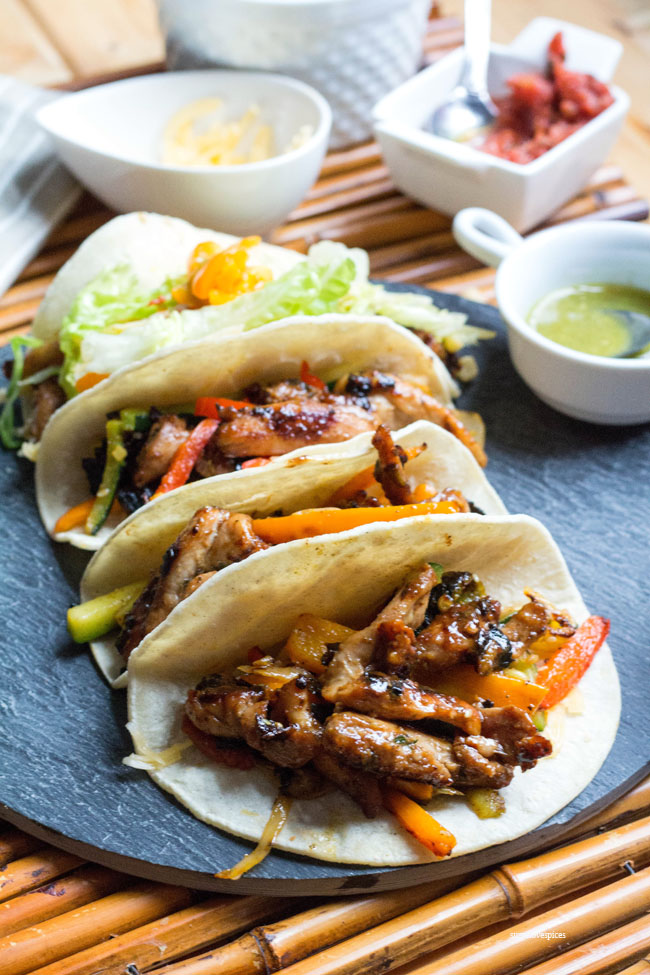 Yes, it's taco Tuesday and the creative juices were flowing creating soft corn tortilla tacos with Asian flairs and spices. I love tacos, fun food at any table and one that has come a long way since my first taco at A&W when they had waitresses on roller skates bringing your food to your car on a tray and rest it on your car window. Such great times eating those crispy hard shell tacos filled with ground beef, loads of cheddar cheese and shredded lettuce, tomato and some spicy salsa and sauce.

Well, today with cooking and culinary cultures evolving tremendously we have tacos turning heads everywhere. I have had tuna tacos, lobster and shrimp tacos, vegetarian seitan tacos, all incredibly good.

Today being Taco Tuesday I wanted to create something different. Something that I had never created before. So into the think tank I went and out of it, I came with the idea of Korean BBQ in mind. I don't know about you but when I ever am close to a Korean restaurant and smell their BBQ going with all those spice scents in the air, I am always left with the craving to get a nice skewer of chicken or beef or shrimp. It just so happened that a while back I was at a Korean grocery store and saw a jar of a Korean BBQ sauce that looked pretty interesting and so I purchased it not knowing what I was going to do with it, so on the pantry shelf it went, and today we are going to crack that jar open and marinate some skinless chicken thighs for a good day. This will definitely intensify that flavoring into the flesh of the chicken. 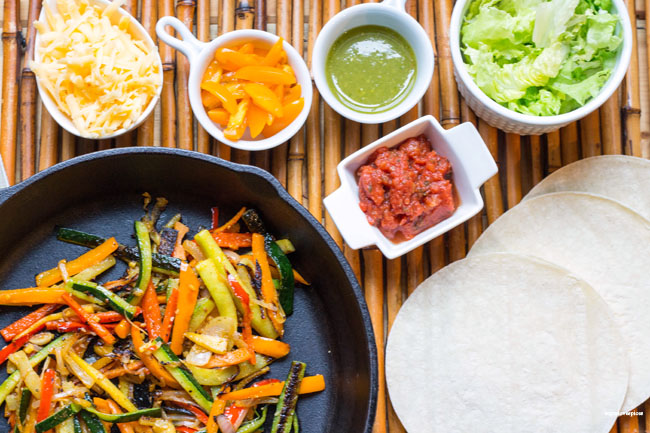 Looking in the vegetable crisper I notice some colorful peppers, zucchini, onions, carrots. This will make a nice stir fry, and add another level of texture to our tacos. Using the cast iron pan ensures some nice charred edges and beautiful caramelization of flavors.

The Latin element of this dish, some nice freshly made corn tortillas, and a chimichurri sauce for that little kick we need. The tortillas and chimichurri sauce we purchased from a little Latin store on 124 street north central Edmonton called El Mariachi. A cute very simple store with lots of interesting Latin products. This was Nicoletta's and my first time there. When we first walked in it was like going through a travel warp and the feeling of being in Mexico on a dry sandy road came to mind. Kids were having their face painted by an amazing artist who was there doing some murals on the walls of a future Latin restaurant they will have. The kids were so cute painted as little luchadores running and screaming then some crying, lol. Talk about being immersed into a culture. Well we walked out of there with some beautiful corn tortillas and that chimichurri sauce, and a lot of ideas after looking at everything they had on their shelves. Don't you just love shopping at these cultural place? I do. 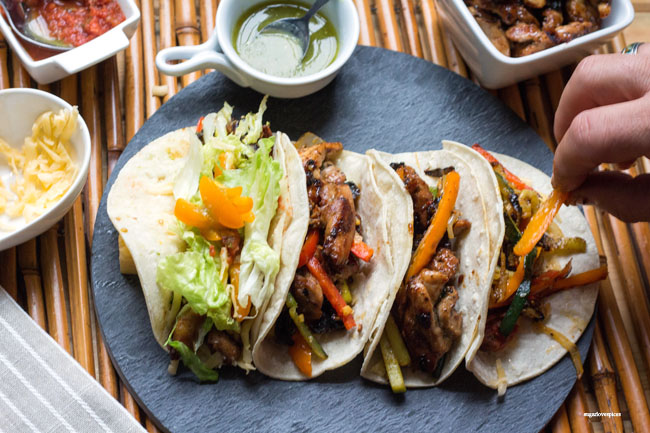 The chicken I seared in a very hot pan and as it cooked it caramelized and the chicken developed some nice candied sugar edges and that smell. The brown sugar, tamari and soy sauce, sesame oil, fresh ginger, garlic, chili paste, lemongrass all simmered together forming a thicker BBQ sauce glaze, yum! The vegetables very simply seasoned with ginger, garlic some five spice and salt and pepper and of course sesame oil, still a bit crisp for the texture but so so good. Shred up some iceberg lettuce, we diced up some yellow cherry tomatoes and a good amount of shredded Monterey jack cheese, nice and sharp a great contrast to the sweet spiciness of the chicken and always a great partner to fresh crisp lettuce and tomatoes. Now the fun part, putting these babies together. The tortillas nice and warmed up in a medium pan then onto a plate where I first put some of the Monterey jack cheese and salsa. The corn tortillas still being warm melts the cheese and helps hold the next ingredient in place, the chicken, topped with some of the stir fry, then some more cheese. A topping of lettuce and tomatoes goes next, some more cheese..... Then the topper a nice drizzle of that zesty, zingy chimichurri. 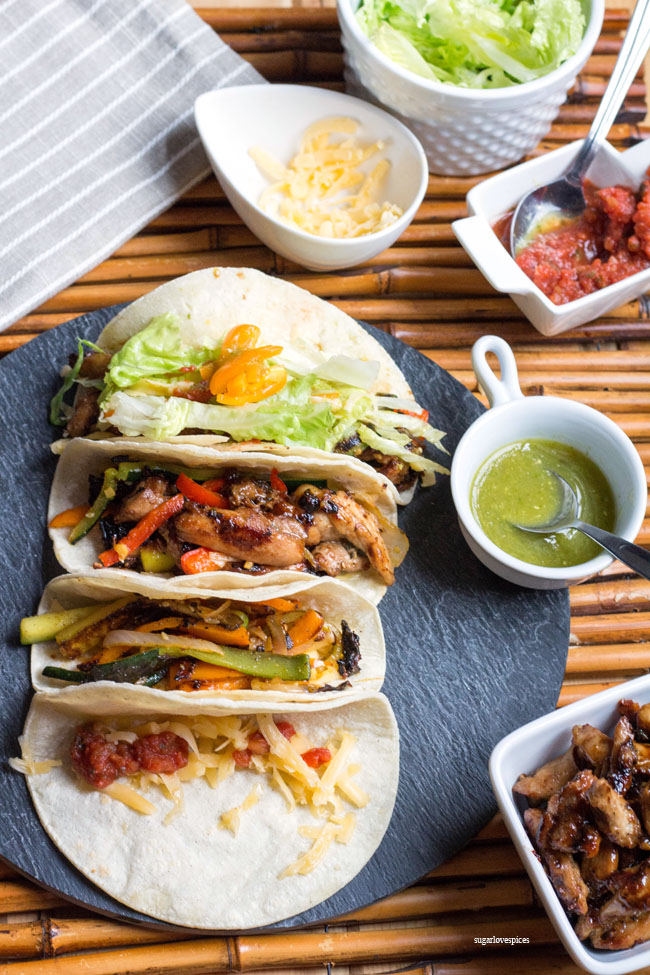 This taco has so much flavor the sweetness of the brown sugar and all those spices in the Korean BBQ sauce all crisp and caramelized with that juicy succulent chicken, the jack cheese sharp pungent coming through again and again as you go through the layers of texture. The lettuce crisp fresh, and sweetness and acidity from the yellow tomatoes. Then when you thought it was all over the chimichurri sauce hits and a nice backdrop of heat hits you not too spicy just enough leaving you wanting another and another. The salsa peaks through subtly not taking away from the main flavors of this dish. All and all a great recipe, packed with textures and flavors. A Tango of east-meet-west with these Korean BBQ Chicken Tacos.

The chicken I marinated all day.
Also the cooking time is combined as you could cook the chicken and veggies at the same time but in different woks.

If you're not a chicken lover, try our fish taco.