Crostata Ricotta e Marmellata di Visciole (Ricotta and Sour Cherry Crostata), a delicious and irresistible dessert of the Jewish Roman cuisine. A lemon flavored pasta frolla (shortcrust pastry), filled with a layer of visciole (sour cherry jam or fresh sour cherries), and a layer of sweetened ricotta. To this day, you can enjoy this crostata in Rome in the Jewish Ghetto’s bakeries, or in many restaurants specialized in traditional Roman cuisine.

Song of the day: Sting, Shaggy - Just One Lifetime 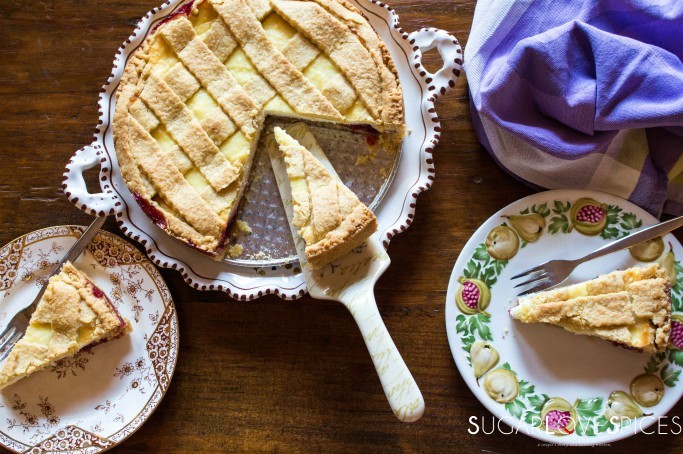 Rome has a way of getting under your skin. Despite the traffic, the loudness of its people, the amount of tourists any time of the year, the incoherences.

Rome is not an "easy" city to live in, but it is also a unique city, and one of the most beautiful capitals in the world. You can rant and rave about all the things that do not work, that you would like were different and better. But in the end, all it takes to forget -if just momentarily- is a walk through the city getting "lost" in its alleys. Even after a lifetime in Rome, you still admire the magnificence and wonder at how amazing its iconic foods are. 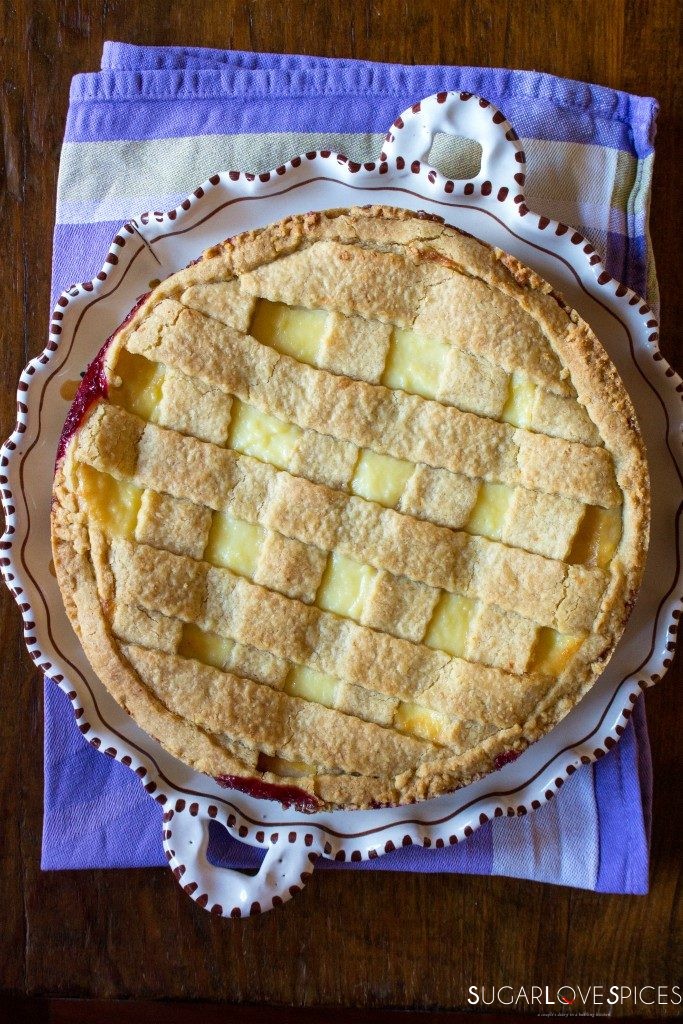 It seems that the origins of the Crostata Ricotta e Visciole date back to the 18th century, when a papal edict forbade Jews to sell dairy products to Christians. It was then that the bakers, to elude the controls of the papal guards, decided to hide the ricotta between two layers of pastry and mixing it with the sour cherries to make it less visible. As a matter of fact, the traditional Jewish tart does not have the lattice top as the usual crostata, but it is covered with a layer of pastry on top.

Since there is no official recipe, there are several variations:

Only one thing seems to be imperative: the ricotta has to be sheep's ricotta, typical of Rome and the area, ricotta that is richer and "fatter" than the lighter cow's ricotta.

I chose to separate the layers of ricotta and sour cherry jam and make the lattice top. I made the lozenges wider but stayed traditional to the definition of a crostata.

How to describe a crostata

Crostata is the quintessential Italian dessert. Store bought or homemade, it is the dessert we make and eat the most, in all its variations. A bit like a pie, a lot like a tart, crostata has its own personality. Not to be confused with a galette which has a free-form crust, the crostata is a baked tart that has a shortcrust pastry at the bottom, and -mostly- a lattice crust on top. In the middle, there can be different fillings: jam, chocolate, ricotta, ricotta and jam, cream and fruit. The crostata can also be blind-baked and then filled with pastry cream (crema pasticciera) and topped with fresh fruit, and this is called crostata di frutta. 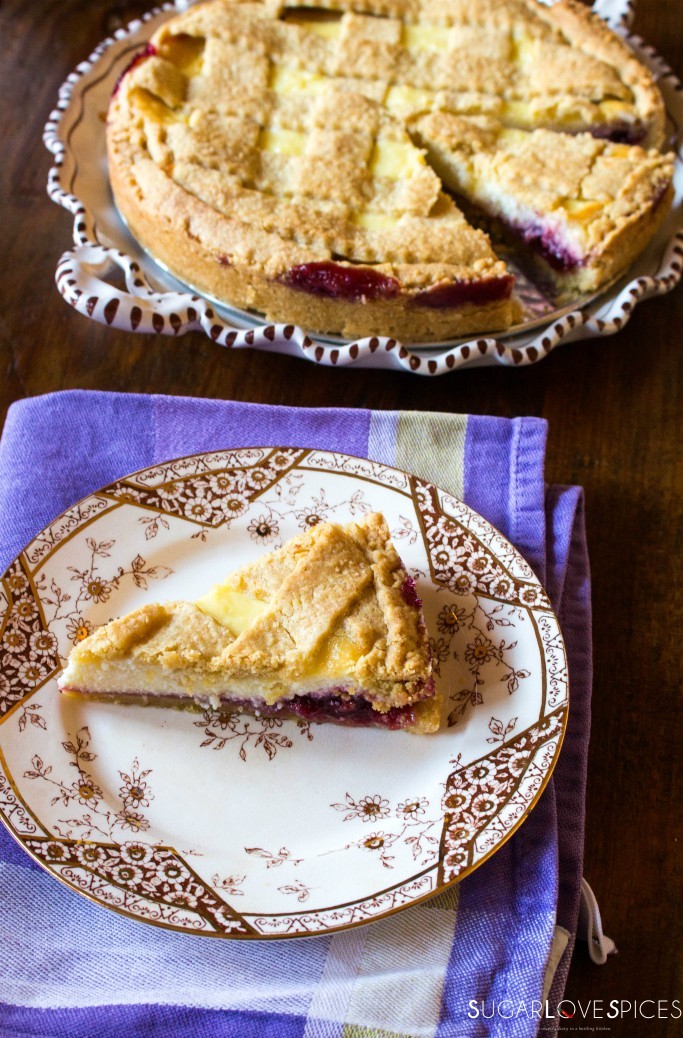 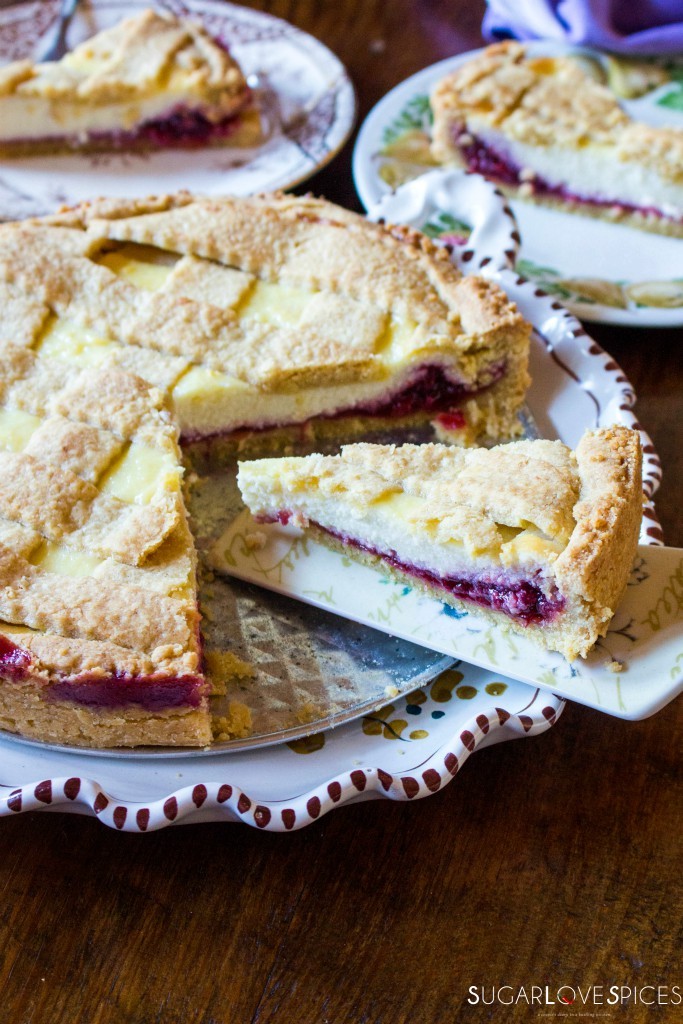 Every occasion is good for Crostata

Every occasion can be a special occasion to make crostata. Typical end of a Sunday lunch, or Christmas and Easter dessert, it is nonetheless one of those baked goods that we frequently make just to have it around the house or to bring when invited over to someone's house.

The Crostata Ricotta e Visciole is no exception. Although not exclusively made during Easter time, being a dessert featuring ricotta it is pretty common to find it at Easter like other typical ricotta cakes. 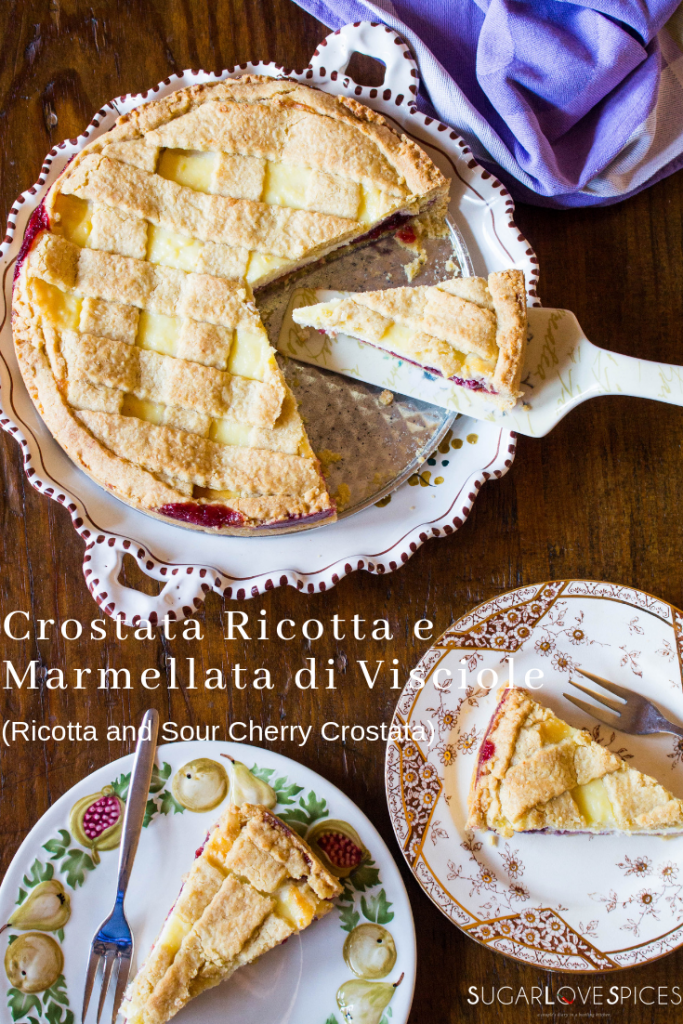 Crostata Ricotta e Visciole is rich and light, sweet and tangy at the same time, in an idyllic duality where differences and extremes often coexist.

For those coming to Rome, a tourist stop is recommended to visit the Jewish quarter and taste this delicacy in one of the most historic Ghetto bakeries in Via del Portico d’Ottavia. In the meantime, you can still have a true taste of Rome just making it at home.

Try it, it will become a favorite for sure!

Song of the day: Sting, Shaggy - Just One Lifetime

Crostata Ricotta e Marmellata di Visciole (Ricotta and Sour Cherry Crostata), a delicious and irresistible dessert of the Jewish Roman cuisine. A lemon flavored pasta frolla (shortcrust pastry), filled with a layer of visciole (sour cherry jam or fresh sour cherries), and a layer of sweetened ricotta. To this day, you can enjoy this crostata in Rome in the Jewish Ghetto’s bakeries, or in many restaurants specialized in traditional Roman cuisine.

For the shortcrust pastry:

For the shortcrust pastry:

You can dust icing (powdered) sugar on top.

You can keep it in the fridge for 2-3 days and serve it at room temperature or cold. 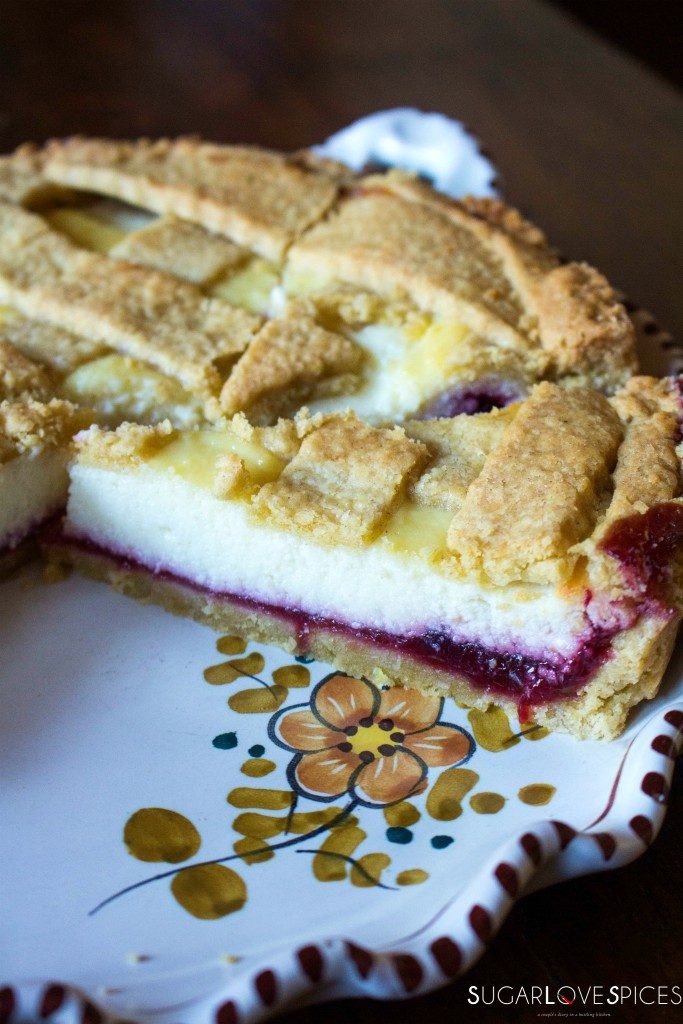