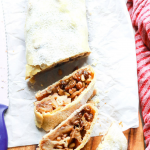 Classic Apple Strudel with Homemade Strudel Dough is a recipe I received from la Signora Edda from Friuli Venezia Giulia, in the North of Italy, that I've adapted a tiny bit. A homemade strudel dough hosts a delicious and fragrant filling made of apples, sugar, cinnamon, raisins, pine nuts, walnuts, dollops of apricot jam, and breadcrumbs toasted in butter. We served it at room temperature, dusted with icing sugar and with whipped cream on the side. Mouthwatering!

Song of the day: Starlight - Muse. 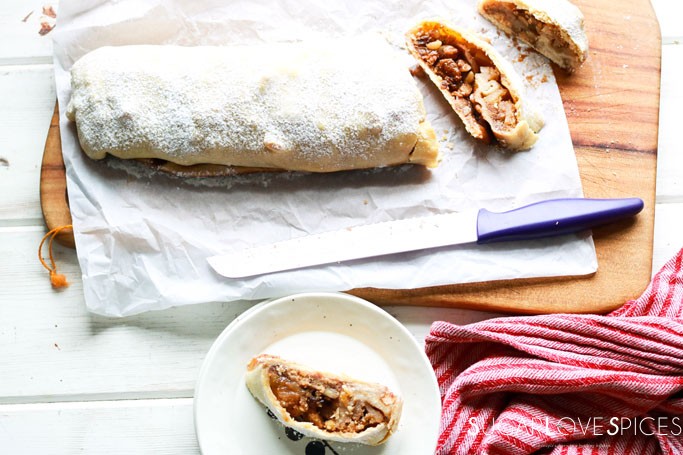 It truly feels like I live two different lives: one in Canada, one in Italy. One freezes the moment I leave, only to be re-started from where I left.

When I go back to Rome, where I was born and bred, I find everything I left behind when I "moved" to Canada to be with my husband. My family is there, my cats are there with my family, my house is there, and so are my friends, car, workplace, and coworkers. Everything is frozen in time and space. I continue from where I left it.

Food has always been a "hot topic" in the conversations at work. We talk about the food we make, the food we love, our favorite places to eat, some new food discoveries. We share recipes, tips, tricks, and often homemade foods, mostly baked goods. 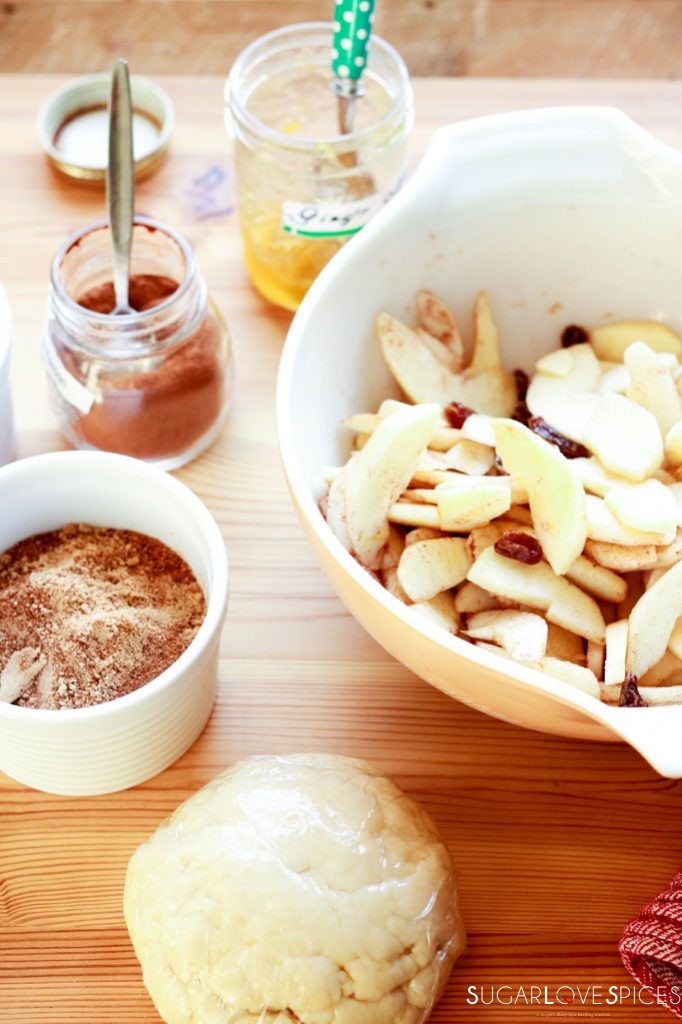 Lately, after the news spread about me being a food blogger, and after the initial puzzled face that accompanies the question "what do you exactly do??", I've been the recipient of a few lovely family recipes.

This Classic Apple Strudel with Homemade Strudel Dough is a recipe, which I adapted it a tiny bit, given to me by my co-worker Monica and it is the strudel her lovely and energetic mother, la signora Edda, has been making for years. It is a traditional recipe from Friuli Venezia Giulia, in the North East of Italy, where she is from.

You mostly see Apple Strudels made by using store-bought puff pastry or phyllo pastry. I get it, life is busy and gets in the way, shortcuts can save your meals, and your desserts.

But there is a most satisfying and rewarding pleasure in following a recipe to make something from scratch, especially a recipe passed to you by a family member or a friend, one that has passed the test of time and taste. 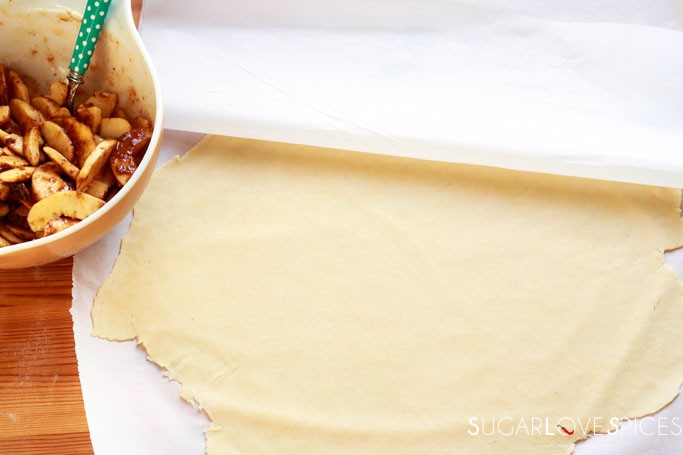 The traditional dough to make strudel is called "strudel dough", a very thin dough wrapped around a filling. It has a reputation for being difficult, and I agree, it is not the easiest. Although, it is not impossible to make with some skills and a little patience.

Making the dough is not the biggest issue, while the stretching and rolling could be responsible for some additional white hair and wrinkles on your forehead, lol. 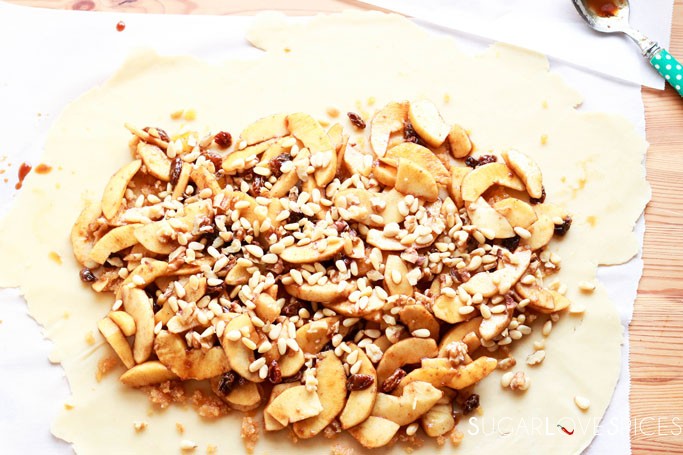 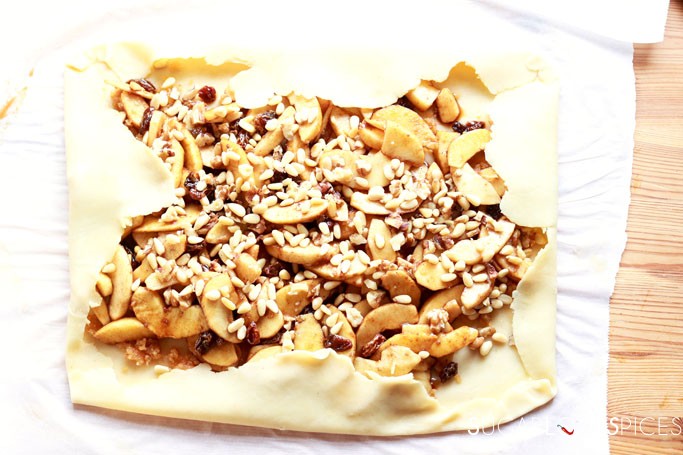 I've seen recipes for a strudel dough using oil instead of butter. I have followed Edda's recipe that called for butter, and the result was great. Probably not as good as hers, since she has many years of practice by her side. I'll keep on practicing!

To stretch the dough, instead of using a clean kitchen towel dusted with flour as it is in the recipe, I rolled it in between two sheets of parchment paper. I think it is an easier solution for a less skilled baker.

Roll and roll and stretch helped also by your knuckles, your aim should be to stretch it thin until you'd be able to read a love letter underneath, as tradition says. I don't think mine was "that thin" but I did not try, although I could have used one of the many letters I received from Loreto in the first years of our relationship. Perks of a long distance relation, lol. 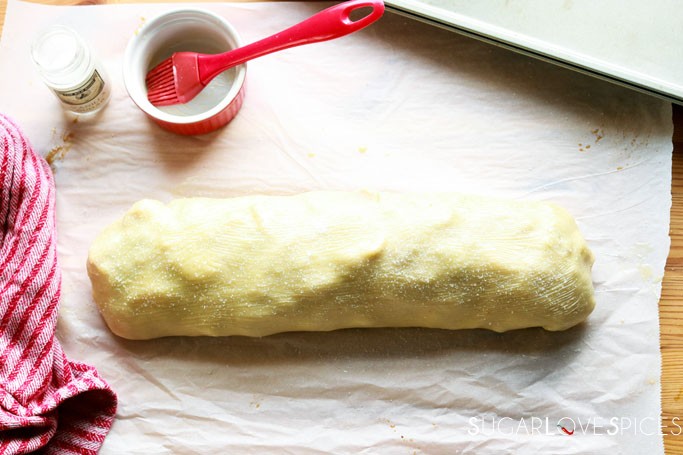 The filling is composed of apples, raisins soaked in rum, pine nuts and a handful of walnuts, cinnamon, coconut sugar, butter, and breadcrumbs. All together, so fragrant and delicious.

Roll the strudel on the long side, tuck the ends under and place it on a parchment lined baking sheet seam side down. Brush the top with butter, sprinkle with sugar (I used vanilla sugar) and bake it until pale golden.  The aroma wafting in the house coming from the kitchen is amazing! 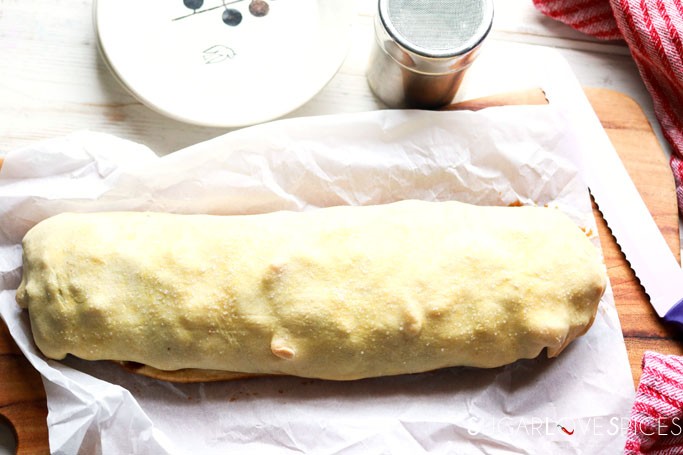 We served the Apple Strudel with a side of whipped cream to some friends who came over for a goodbye dinner before I left Canada to go back to Rome. Loreto made coffee and tea, we cleaned the plates among chats and laughs. A lovely friendship portrait that I brought with me and I take out from my memory folder when I feel lonely and melancholy. 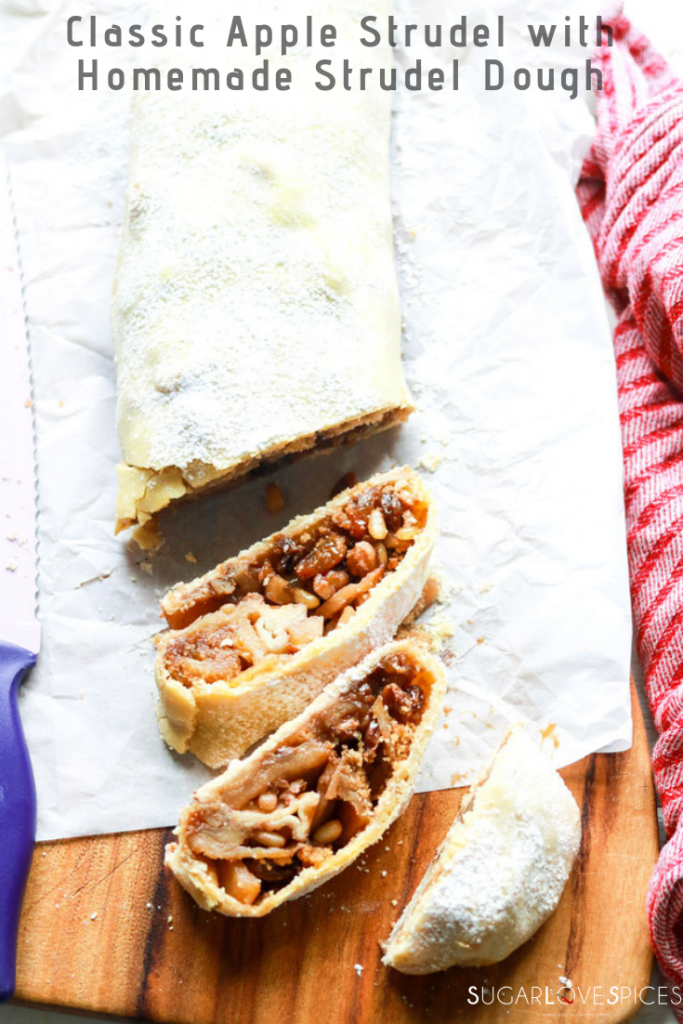 Thank you, Monica, and signora Edda for your recipe! In the summer I'll make your version with cherries!

Song of the day: Starlight - Muse.

If you serve the strudel the next day, leave it on parchment paper and cover loosely with a clean kitchen towel. You can reheat it in the oven or serve it at room temperature.

Serve a slice of apple strudel with whipped cream or ice cream. (We served it with fresh whipped cream flavored with a touch of vanilla extract. Delicious!). 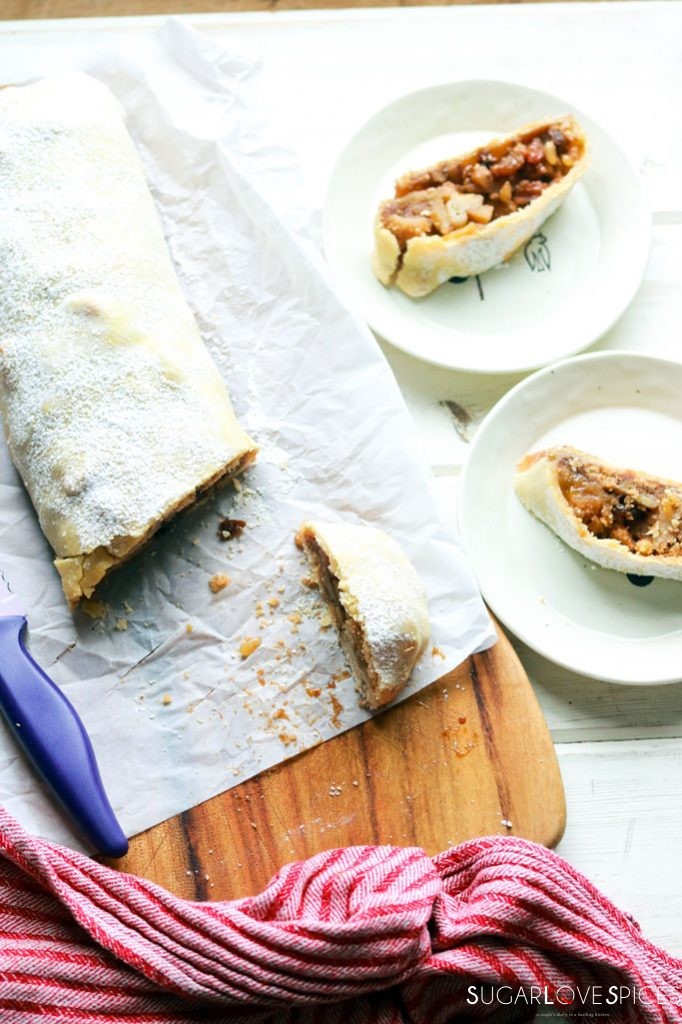