Chocolate Crostata with Chestnut Jam, a celebration of delightful flavors and textures that like spring awakens our senses to the beauty of life. A blend of cocoa and chestnut jam finished with a sprinkle of icing sugar that makes this dessert most luxurious. 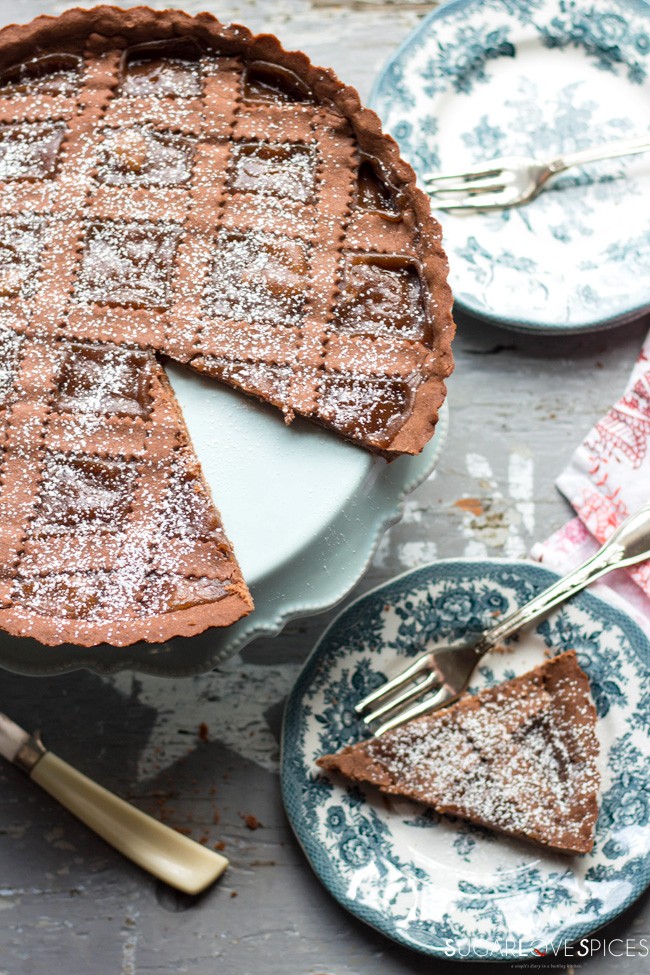 February has gone in the blink of an eye, and here we are in March, the awakening month, where Nature wakes up and revive our senses. Colors are starting to form and underneath the blanket of snow the seeds of imagination begin to rumble. The morning breeze brings with it the scents that spring is upon us.

Or at least that's what it seemed like until this morning. We woke up to a fresh blanket of snow covering our backyard and flurries twirling in the north wind. It seemed surreal, after a day like yesterday when I walked to yoga, the day sunny, the air fresh and smelled like spring. I still can't get used to this ever-changing Alberta weather, the real possibility of snow even in May, June, or July, puzzles me, frustrates me, and yes, I say it, irritates me. I really would need a slice of this Chocolate Crostata with Chestnut Jam to cheer me up and lift the frown into a smile. But the cake has gone, unfortunately. Few are the things I bake that lasts more than a couple days. Definitely a boost of confidence for me, always in need of reassurance.

Lingering on the memory of this wonderful Chocolate Crostata, let's delve in what the past week has been: definitely busy, with recipe development, photography sessions, baking, and cooking. Plus some social events, a couple dinners with friends, and my usual yoga and jazzercise classes. There were the on-schedule morning phone calls with my parents, including a couple of Skype calls. It is entertaining to witness my parents and technology (many are the times I can't see them but they can see me, or vice-versa), but it touches my heart to see them in that so familiar kitchen, flooded with sunlight, with big smiles on their faces at the moment they see me. On our last Skype call, my father showed me and Loreto (because it's early morning in Canada and Loreto is still at home) what my mother had baked that afternoon: a crostata with one of his latest jam creation, a banana and apple jam.  My father is the "jam guru", he is amazing and makes jams out of every fruit he can get his hands on. It happened that I had baked this Chocolate Crostata with Chestnut Jam the day before and so Loreto showed it to them. After hearing my mother say "oh, nice one!", my dad's first words were "where did you get the chestnut jam"?? "Errr.... in the store, dad..." was my answer, and he went on saying that he still had 3 jars from the last batch of Fall chestnut jam "production" and I could have used one, but anyway, he was going to keep one for this summer so I can bake this Chocolate Crostata for them. I would have loved to use his homemade chestnut jam, it would have only cost me an arm and a leg to fly there and get it 😉 . I'll make a crostata for them when we go this summer. Nothing would make me happier! 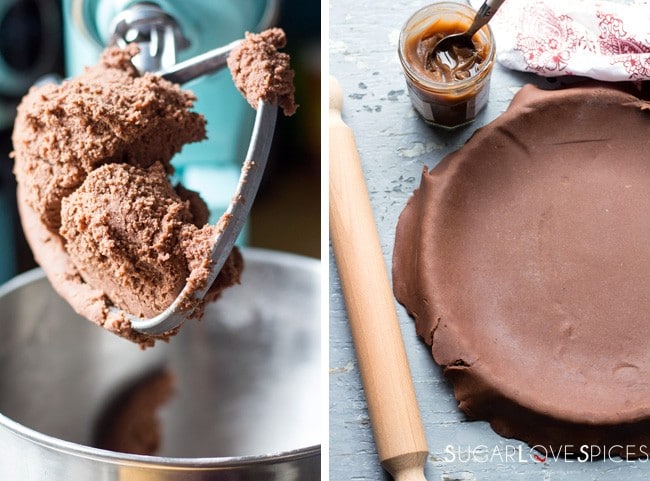 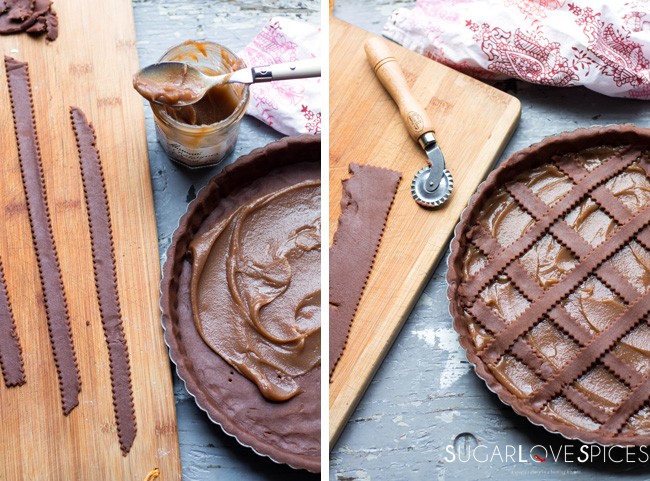 It is not unusual that me and my mother both baked a crostata. Crostata was and still is our go-to dessert for many occasions. We've made it so many times, with so many different kinds of jams, with lemon cream and fruit, with Nutella, with butter or oil in the dough, and with cocoa like this Chocolate Crostata. Although lately, I have seen on the web a galette being called crostata (and I made one myself that I called Rustic Crostata), the typical Italian Crostata (if it's not the one with cream and fruit on top) has a lattice top and is baked in a -usually- round pan with corrugated edges. Like the one I've used here.

I don't know what it is about making dough, either for bread, pasta, pizza, or tarts and pies. I love working the dough, from the doughs that need a vigorous working, to doughs that need that gentle touch. That feeling in my hand of a blend of ingredients that form into a smooth, and velvety consistency. I know it in my stomach when it's just right, call it women's intuition or genes passed down from generation to generation. 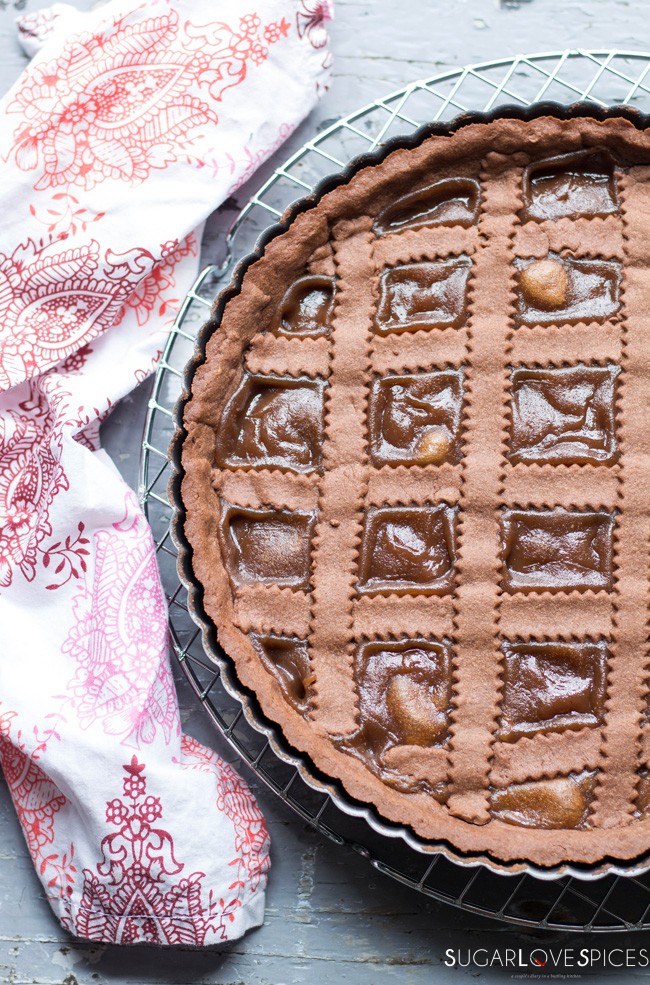 In a crostata, what I like is also making that lattice top, which is a form of expressing my inner artist. Precision -more or less- of cutting those pieces so they are uniform and then intricately placing them on top to give you that beautiful pattern and allow you to be intrigued by the chestnut jam peeking through the window-like boxes. 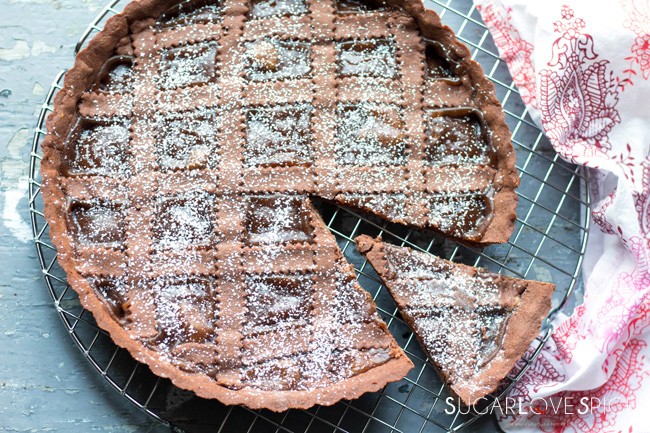 This Chocolate Crostata with Chestnut Jam is a delight to the palate. From the tender, flaky, chocolaty crust that crumbles then melts in your mouth, to the sweet nutty velvetiness of the chestnut jam that just flows on your tongue. The combination of the two captured in your mouth in a blissful duality of texture and taste.

Song of the day: "Time after Time", Cindy Lauper.

Chocolate Crostata with Chestnut Jam, a celebration of delightful flavors and textures that like spring awakens our senses to the beauty of life. A blend of cocoa and chestnut jam finished with a sprinkle of icing sugar that makes this dessert most luxurious.

The recipe of the cacao dough is from the Italian Pastry Chef Luca Montersino.

For the cacao pastry dough:

The total time includes the resting time for the dough in the fridge. 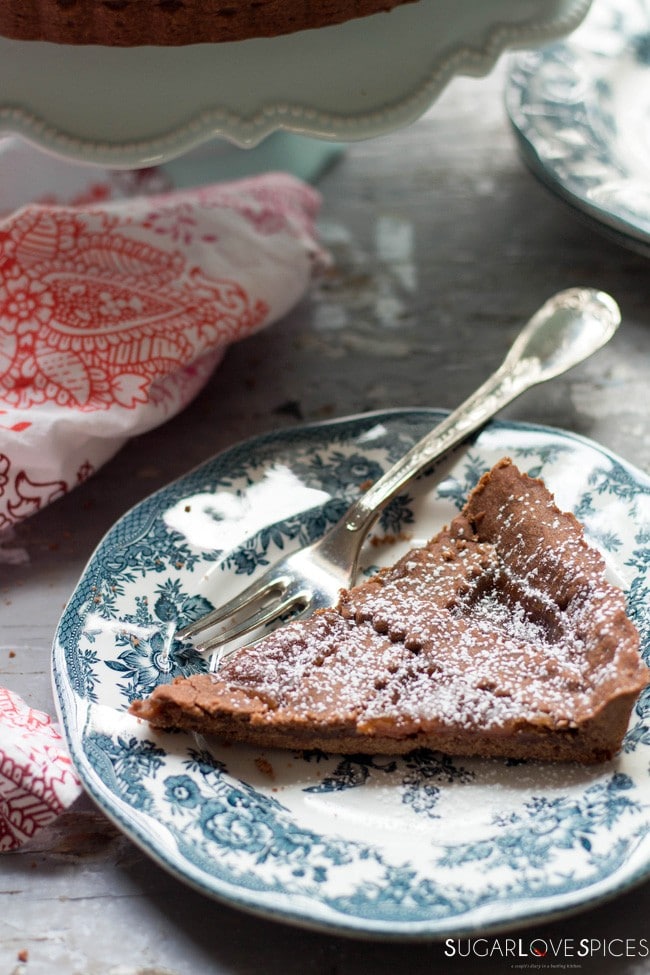 Disclosure: All links in our post are NOT affiliate links. They are only about products or places we normally purchase and like.