These brownies are moist and not too fudgy, a bit crunchy from the pecans and chewy from the dried cherry, rich in bittersweet chocolate and not too sweet. 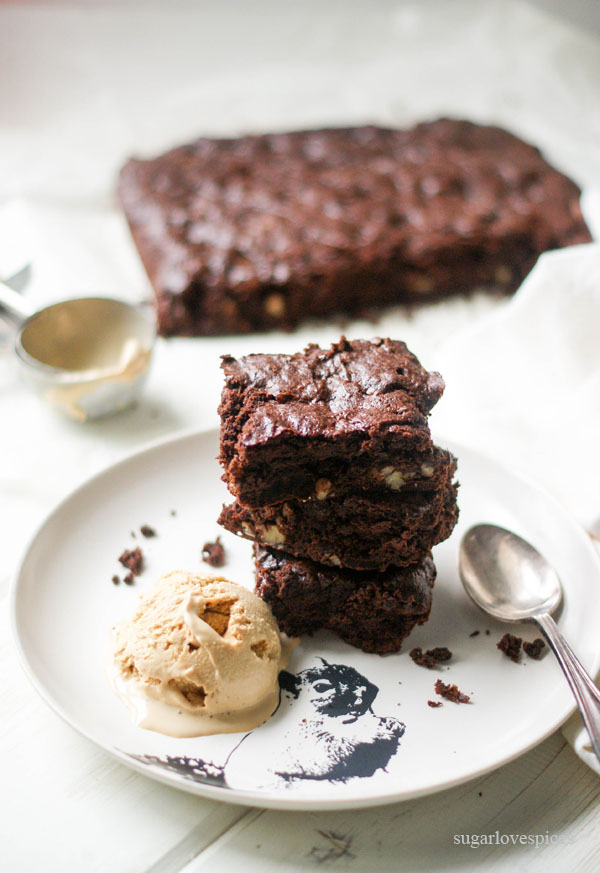 Chocolate. Remedy for a downer mood. We tend to turn to chocolate when uncertainty, fear and anxiety set in. Its sweetness, a reminder of the good things in life. Something constant in an uncostant world.

I wasn't one to love brownies. If they were the only dessert on a party tray, I would skip dessert, even if sweets are the thing I love most. I've always found them overly sugary, couldn't stand eating a piece. But today it's different: I like them and I'm eating them. After all, they're chocolatey, with the cocoa and Bernard Callebaut melted chocolate. Plus, I found the recipe on "The Messy Baker" cookbook, and you all know how much I enjoyed reproducing recipes from this book.

But the real reason is that my husband loves them, and it gives me pleasure to bake something he likes.

I wanted to leave him something memorable, so yesterday I decided to bake Cherry Cinnamon Pecan Brownies.

I changed up a few things from the original recipe: I used a part of brown rice flour and two parts of all-purpose (I cannot hide my love for brown rice flour); I used half a cup of dried Rainier cherries that we bought at the Strathcona Farmers Market and half a cup of pecans. I flavored them with cinnamon and vanilla; I used almond milk, that is what I mostly drink, and coconut sugar, that is replacing ever so often the brown sugar in our pantry. 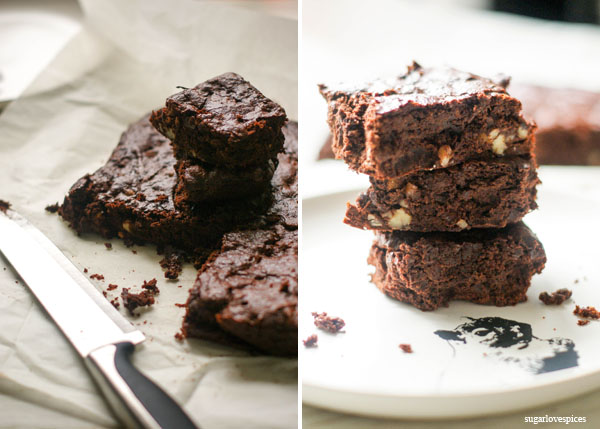 My mind was racing yesterday, I felt agitated and nervous, rushing and trying to do too many things at once. I went to jazzercise, but it didn't help, it actually got worse, I got all wound up like an old spring-driven clock. I needed a diversion...

Baking relaxes me, measuring all the ingredients grounds me, mixing the components together keeps my mind occupied from too much thinking. It actually worked, for the time being.

They were not at all difficult to make, after I melted the chocolate in a bain-marie with the milk and butter, I mixed all the ingredients together and poured the batter in a lined square baking pan. Thirty five minutes in the preheated oven and voilà, the brownies were ready. 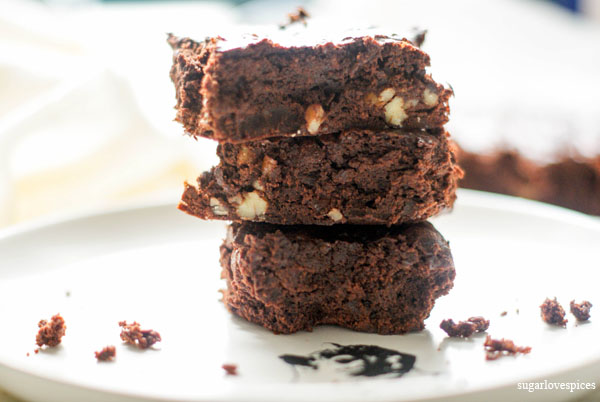 Taking the pictures distracted me some more, then, it was time to taste them. I simply removed two brownies from the stack of three you see in the picture below, sat down and enjoyed my first brownie with a big dollop of salted caramel ice cream. Great combination of flavors. My mind was at ease, finally!

The brownie was moist and dense, rich in bittersweet chocolate, and not too sweet or "fudgy" (my biggest fear). Crunchy from the pecans and a bit of chewy from the dried cherry pieces. Overall, a delectable, enjoyable sweet. I like that they are not so chewy that they form a glue in your mouth, they are perfectly balanced in texture between crumbly and fudged. My husband will be proud of me. 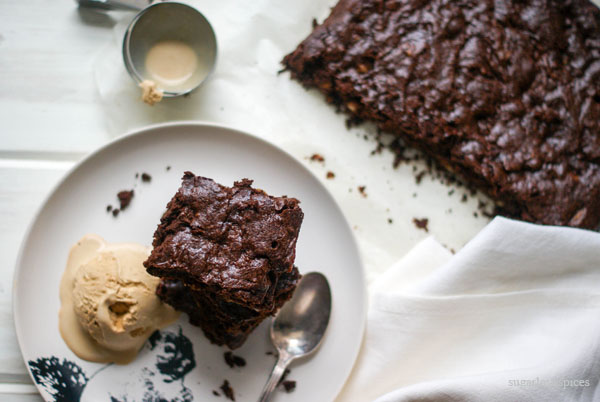 So why, you're wondering, I was in the grip of anxiety attacks all day?

Well, today I am leaving Edmonton, Canada, to go back to Rome, Italy, to work. From today on, for the next three months and some, my husband will be at 5,120 miles flight distance, in some other world, to the other end of a telephone line. Loreto would say we're not that far energetically speaking, and then give me that smile and hug that always make me feel better, and then the humor with him using his East Indian Sage voice explaining impermanence 🙂 .

So you see, it is a melancholy day, a day that requires chocolate and its soothing effect, and a reminder of Loreto's love.

Song of the day: Simple Plan - I Don't Wanna Go To Bed.

Leaving the pan of brownies intact as long as you can helps keep them moist. 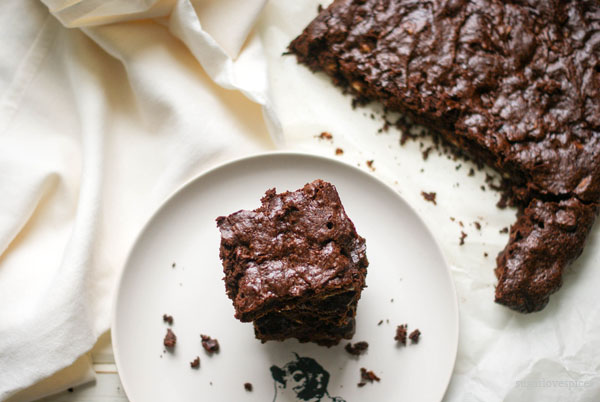