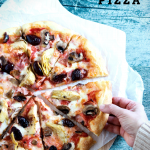 Capricciosa Pizza is a classic Italian pizza. The "Capricciosa", as everybody calls it, is on every pizzeria's menu, usually under the list of traditional pizzas. Its staple ingredients are tomato puree, mozzarella, cremini mushrooms, artichoke hearts, black olives, and prosciutto cotto (Italian cooked ham).

If you're thinking that you already know of a pizza having these same ingredients, you are right. They are the same as the Quattro Stagioni Pizza, however, there you place them in 4 distinct sections (Four Seasons).

The origins of the Capricciosa Pizza

There is a pizzeria in Rome called La Capricciosa where this pizza was "invented" in 1937. It was called "clean the fridge" pizza by the pizza chefs because the toppings varied according to what was leftover.

To explain, Capricciosa means capricious, in Italian. It is like a Margherita pizza, with the addition of different toppings scattered randomly on top.

As a matter of fact, during the years, the Capricciosa pizza has become standardized using the same staple ingredients, such as:

Overall, you can find the classic Capricciosa more or less everywhere in Italy. In some Regions, though, it is not uncommon to find variations, for example, capers, sausages, or anchovies. Also, very frequently, a hard-boiled egg, and sometimes even mussels. All due to the taste and creativity of the pizza chefs and what is available in the Region.

How to arrange the toppings

After you've stretched your pizza dough, homemade or store-bought, spread very little tomato puree. You do not want the ingredients to lay in a pool of sauce. A note on the pizza sauce: in Italy, we never cook our tomatoes, the sauce is always made with canned plum tomatoes, crushed or pureed, simply dressed with evo oil, salt, oregano, and/or basil.

Then, arrange the ingredients on the sauce: we started with mozzarella, then ham, artichokes, sliced fresh mushrooms, pitted black olives, cut in rounds or halves.

Once you've arranged all the toppings on the pizza, do not forget the drizzle of olive oil before putting it in the oven. A must for any pizza.

We usually start cooking the pizza in a well-oiled pizza pan in a very hot oven (425-430° F). When it is halfway cooked, we take it out of the pan and place it on a pizza stone to crisp up.

The importance of good quality ingredients

As a result of using leftovers, sometimes also of dubious quality, this pizza had lost its grandeur during the years.
However, lately, with a renewed attention to the quality of the ingredients, this pizza has seen its revival. That is to say, not only the dough is important, but also the ingredients: organic canned plum tomatoes, fresh mozzarella, fresh mushrooms, artichoke hearts in olive oil, high-quality cooked ham, and black olives (not the canned sliced ones).

Crisp crust with a gooey top

Look at the lovely golden crust! Also, the luxuriously melted cheese and perfectly displayed toppings. Everything is in harmony and the aroma coming from the pizza is very enticing.

I can't resist grabbing a slice. The homemade crust is holding wonderfully and not flopping over. There is a balance between the sweetness of the tomato sauce, mozzarella, and ham with the acidity of the olives and artichoke hearts while the mushrooms offer a lovely plump earthiness.

Get your Italian on with this wonderful Pizza Capricciosa!

Capricciosa Pizza is a classic Italian pizza. The "Capricciosa", as everybody calls it, is on every pizzeria's menu, usually under the list of traditional pizzas. Its staple ingredients are tomato puree, mozzarella, cremini mushrooms, artichoke hearts, black olives, and prosciutto cotto (Italian cooked ham).

The prep time does not include the making of the pizza dough. This requires at least 2 and a half hours.