A skillet frittata with seasonal asparagus, potatoes and onions, all organic ingredients bought locally. A meal great for those summer lunches. 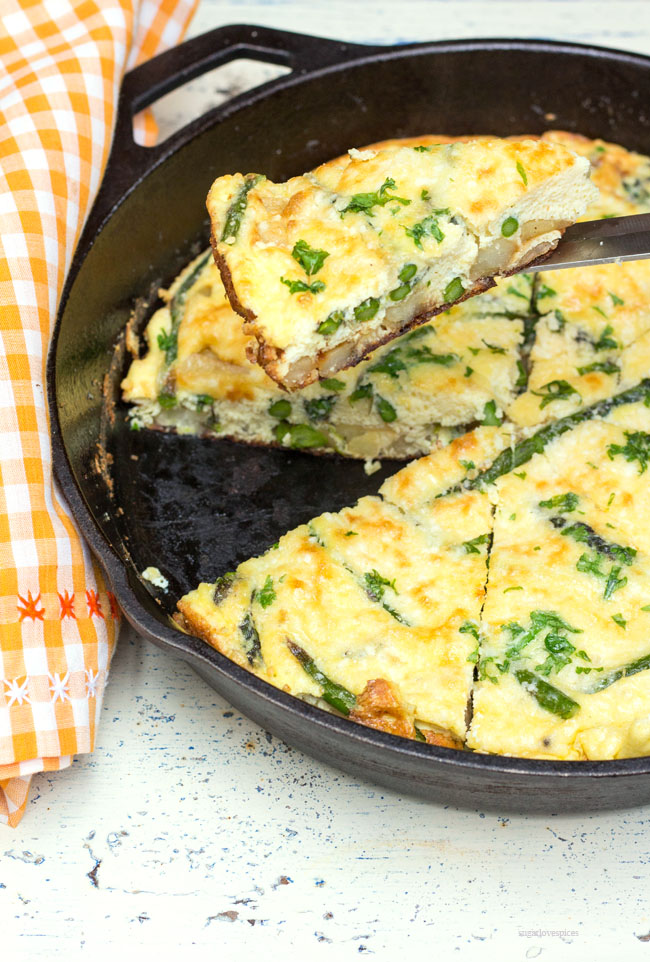 Frittata was not a favorite of mine when I was young, but as time went on and developing more flavors in my repertoire, I became a fan. I used to watch my mother make it. Her favorite was either a fresh home grown green onion frittata with parmigiano cheese, or a nice zucchini frittata with the zucchini sliced nice and thin. Most of the time she would even put some peperoncino (chili peppers) to give it a bit of heat.

This dish demands some skill. Most people think that it is like a quiche and baked in the oven. This is not the case, traditionally; it is done in a pan with good extra virgin olive oil and when the bottom has formed and turned a nice golden color, you get a plate that covers the whole saute pan and flip it into the plate then back into the pan. I always thought of it as some kind of circus act and when my mother was doing the flip I would stop breathing, close my eyes just at the point of the turn. My fear was that there would be egg and veggies all over the floor. It never happened, not even a drop. Definitely a skill set I wanted to develop, and my drive to make frittata was set.

Asparagus is coming to the end of its growth season in our neck of the woods. So to honor it properly we have created an Asparagus and Potato Skillet Frittata. 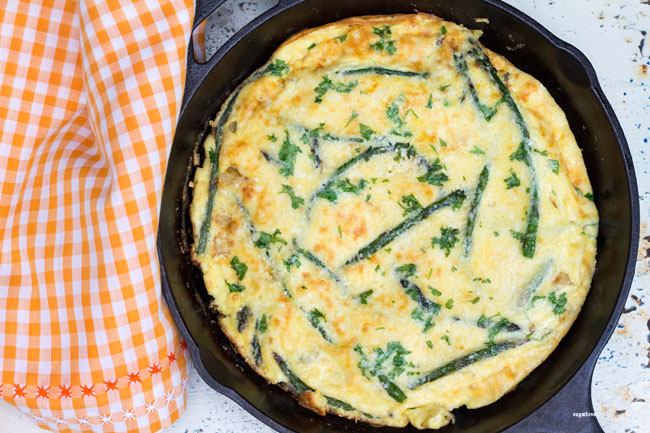 Wanting to make this a real rustic and nostalgic  frittata, Nicoletta and I decided to do it in a well seasoned cast iron skillet. I thought that it would really give a nice bottom and crispy edge to this dish and give it that old country feel. I am a bit funny when it comes to setting moods. I am a very visual person so when I thought of this asparagus and potato frittata, I had visions of this old Italian farm and a mom in her cultural dress cooking over an open fire. The men just coming in over a dust cloud in the fields where they were plowing with an old plow and donkey, dirty, rugged, and tough looking ready to wash up in a water trough close to a barn. Nicoletta always tells me I have a very active imagination, and she is not the only one who thinks so, lol. Back to the frittata before I make a movie out of a vision. Using the cast iron skillet would demand some attention as it gets very hot. Moderating the heat is of utmost importance. I don't know about you, but burnt egg smell is not the most pleasing and appetizing thing. 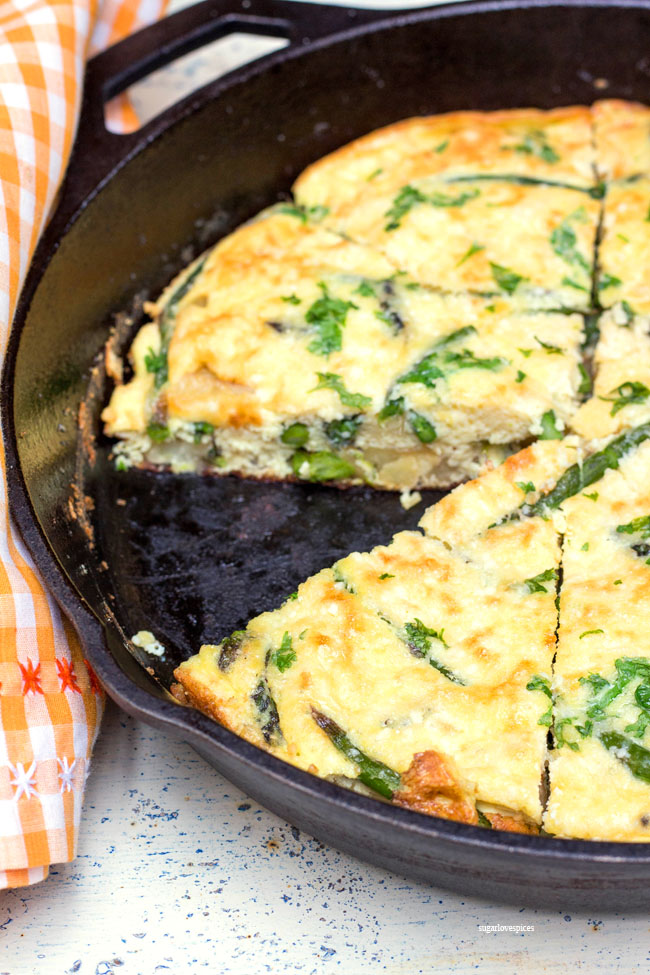 We love organic free range chicken eggs, love the flavor and color and cannot go back to the norm. This is a thing Nicoletta and I have found out. Since trying organic and fresh great tasting ingredients there are some things we will not sacrifice like extra virgin cold pressed olive oil, organic flours, goat butter, etc. So having said that, this frittata is made with all ingredients being organic and fresh. Starting with the olive oil greasing the skillet and ending with the onions and asparagus, potatoes and eggs. The key to any good frittata I believe is the green onion. I love that smell as the onions are sweating in the skillet and in goes the nicely steamed asparagus, cooked in olive oil and vegetable broth. Finally the thinly sliced potato joins the mix. Then, when those are beautifully sauteed, in goes the eggs whisked wonderfully into a golden colored creamy texture, mingling and sealing the flavor of the green onion, potato and asparagus.

To flip this Asparagus Potato Frittata or not? That is the question.

After assessing the situation and feeling the heaviness of the skillet, we thought that doing this frittata the traditional way would be a difficult task. Having to hold the blistering hot cast iron skillet, then turning it while a plate hugs the very hot top rim was about a 10 on a safety concern chart. Having said this Nicoletta and I decided to finish it in the oven, much to our dismay. 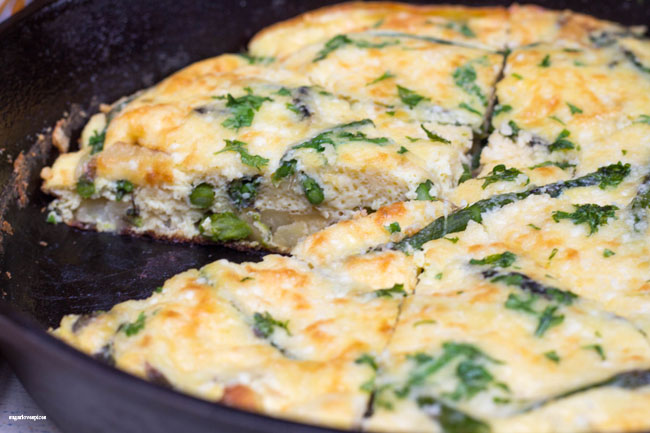 Now for the taste test!

The bottom is nicely browned and has that crispy texture and taste. The inside light fluffy with morsels of asparagus, earthy, tender, juicy. The onion comes through with its sweetness and smoothness. The potato perfectly cooked,  just starchy enough to compliment the other textures, and the grated parmigiano and pecorino cheese adds that nice acidic, sparky kick. I love this rendition of the Asparagus Potato Skillet Frittata.

This song was originally done by Domenico Modugno, but I love Alfie's rendition, very Italian and very heart felt.

In search of more recipes featuring asparagus? We've got you covered:

PENNE PASTA WITH ASPARAGUS AND MUSHROOM

More recipes you may enjoy 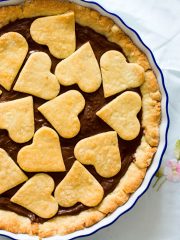 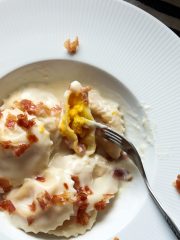 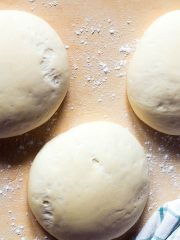 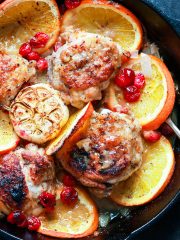